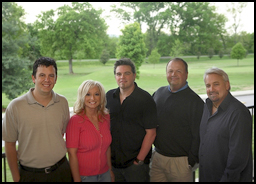 NASHVILLE, TN (CelebrityAccess MediaWire) — Songwriter Sonya Kelly is beginning to see success with music industry cuts and film placements. And now, her most recent song success may have her taking- up the game of golf. When Sonya’s managers Tom Rutledge and Ed Nash (Rutledge Nash & Associates) approached her about writing a song for The First Tee organization’s 10th anniversary, she thought, “Sure. Why not?”

The First Tee, an initiative of the World Golf Foundation, is a 501(c)(3) nonprofit organization based in St. Augustine, FL at World Golf Village, home of the World Golf Hall of Fame. Its mission is to impact the lives of young people by providing learning facilities and educational programs that promote character development and life-enhancing values through the game of golf. Since its inception in 1997, The First Tee has introduced the game of golf and its values to more than 2.2 million participants and students in 48 states and four international locations – Canada, Ireland, New Zealand and Singapore. Former President George Bush serves as honorary chairman.

For Sonya Kelly, the mission of The First Tee reflected the way she was raised. “When I was asked to write this song,” Sonya explains, “I read their mission statement and it really struck a chord. I was lucky to grow up with parents who never used the word ‘can’t’ — instead, it was always ‘why not?’ So I understand the importance of goals and dreams first-hand, and I think it’s important that we instill that in our children for the future. I was raised with the same value system and life philosophy that The First Tee is helping to instill, and that was the driving force and creative inspiration for this song.”

Every year, The First Tee selects young people from all over the country to travel to a specific city and take part in their week-long life skills and leadership academy. This past summer was the third time in five years that the academy was hosted by Golf House Tennessee and lead by Steve Merrill, Senior Vice President of The Tennessee Golf Foundation. Steve wanted to give The First Tee participants an experience unique to Nashville and Ed Nash decided to make the experience a truly memorable one. “We started off with the simple idea of having the kids tour a Nashville recording studio and sing to a track of an already existing song,” Nash says. “But after more brainstorming, I knew we can do something more.”

Then Sonya brought the song she’d written, As Far As Your Dreams, to Rutledge and Nash, who in turn shared it with Steve Merrill. "I had tears in my eyes on the first listen,” states Merrill. “Sonya captured the meaning and endgame of The First Tee — by using the life skills learned as a participant, dreams can become reality."

The next step for Sonya, Rutledge and Nash was to find the right singer and producer. Sonya knew the song was right for Regie Hamm, a critically acclaimed singer/songwriter/producer and recent winner of the 2nd annual American Idol Songwriting Competition with his solo-written song, “The Time Of My Life,” which is already a run-a-way hit for newly crowned Season 7 winner, David Cook. “I always had Regie Hamm in mind to sing this song,” Sonya says. “I knew it needed to be uplifting, and I am huge fan of his — as an artist, songwriter and producer.” Hamm, the father of two adopted children, is also managed by Rutledge Nash & Associates. When the managers approached Hamm, who had never previously recorded a song he hadn’t written, he listened to the demo of As Far As Your Dreams and gladly accepted. “I'm always excited to work with organizations that help kids and make their lives better,” Hamm states. “The First Tee helps kids develop the skills they need to navigate a sometimes difficult world. If you have that kind of support team behind you, anything you want in life truly is ‘only as far as your dreams …’.”

The First Tee Nashville academy participants sang background vocals on the recording and PGA Tour Productions were on-hand to film a music video. The video and song will be distributed to The First Tee Chapters in the United States and their international locations and plans are underway to incorporate “As Far As Your Dreams” into many of The First Tee awareness efforts.

Joe Louis Barrow, Jr., Chief Executive Officer of The First Tee, states, “Thanks to Regie Hamm, Sonya Kelly, the Sound Kitchen and The First Tee of Nashville, the academy participants had the chance to see first-hand how the music industry creates a song — from conception through production. This is a terrific example of how The First Tee works with the community and its partners to create educational opportunities that inspire young people to reach their potential on and off the golf course. The song will serve as a fund-raising tool for our Chapters and help generate enthusiasm for our mission.”

The Nine Core Values of the First Tee are honesty, integrity, sportsmanship, respect, confidence, responsibility, perseverance, responsibility and judgment; combine these nine values with Kelly’s songwriting ability and As Far As Your Dreams becomes a positive statement for young people to live by, on and off the course. –by CelebrityAccess Staff Writers