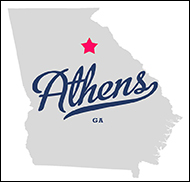 ATHENS, GA (CelebrityAccess) — Officials in Athens are weighing plans to build an amphitheater or enclosed arena in the city's downtown.

According to the Athens Banner-Herald, plans for an amphitheater had already been on the books, but Paul Cramer, the director of The Classic Center downtown, the board that oversees the existing downtown convention and performance space has asked the city to consider an arena instead.

The Banner-Herald noted that a proposed $30,000 amphitheater is a prominent feature in the city's master plan for the development of its downtown region, which was formally adopted in 2014. The amphitheater, located near the county-owned Classic Center, would be constructed in stages, with a capacity of 1,500 to 2,500 people under covered seating, and lawn-style seating for an additional 2,500 people.

However, Cramer contends that an arena would get more use, generating more revenue for the city and allowing it to host a wider variety of events from local sports competitions to concerts.

Initial concepts for the arena plan would see a fully enclosed space with a capacity of up to 8,000 constructed near The Classic Center. – Staff Writers