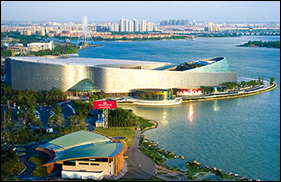 SUZHOU, China (CelebrityAccess) — Suzhou, a city on the Eastern coast of China, will soon be the home to a brand new symphony orchestra.

The newly formed organization will be named the Suzhou Symphony Orchestra and will featured renowned Chinese conductor Chen Xieyang as its music director.

In addition, Chen Guangxian, president of the China Symphony Development Foundation and former general manager of Shanghai Symphony Orchestra, and Robert Blocker, dean of the Yale School of Music, were invited to be members of the organizing committee.

Since it announced recruitment plans in March, the orchestra says it has received applications from 14 countries and regions, including mainland China, Taiwan, Singapore, the US, France, Russia, Spain, the UK, Germany, Italy, Japan, South Korea, Israel and Morocco. Following an initial screening, 389 applicants were selected to join a second round of tests.

The Suzhou Jinji Lake Concert Hall, a concert hall within the Suzhou Culture and Arts Center especially customized for the orchestra, will serve as its home. fter the completion of the hall, the stage will be able to accommodate four brass sections consisting of 120 performers and an 80-person chorus which can perform together, and the auditorium can accommodate 500 guests.

The orchestra is planning to hold its debut concert on December 31st. – Staff Writers