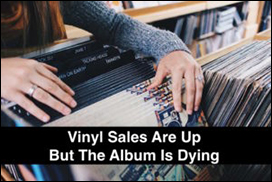 (Hypebot) –Although vinyl has seen a slight bump, the album format overall is in a steady and rapid decline, something which artists and the music industry as a whole need to take steps to embrace, rather than continuing to create a product which is irrelevant to modern audiences.

The music business was once all about the single song, transitioned to the album, and looks to be transitioning back again, as album sales sink lower and lower. While the writing may be on the wall that the concept of an album may be as outmoded as a buggy whip, artists, bands and record labels continue to hang on to the idea rather than looking at the data before them. Like it or not, the album is clearly dying.

According to Billboard quoting the Nielsen Music mid-year report, album sales have fallen by 16.9% so far this year, but even more worrisome is the fact that albums by current artists aren’t catching on, falling by more than 20%. Digital album sales and CD sales continue to fall like a rock, with only vinyl sales increasing (although the growth has slowed to 11.4% with just 6.2 million sales – hardly enough to write home about in the grand scheme of things).

The fact of the matter is that in this Music 4.0 world we now live in, is there even a reason for an artist to automatically make an album without considering some other alternatives first?

Albums are expensive and time consuming to make and, for the most part, amount to a lot of wasted effort as consumers only listen to one or two songs (the singles) anyway even if they buy the album. Most people that get their music from a streaming service will end up cherry-picking the most visible songs (again, the singles), and will never experience the rest of the album cuts anyway. Even if they do, chances are they’ll only listen to each a few times at most, and in most cases, not at all. That’s a lot of wasted effort for so little in return.

The Album In The Age Of Digital
The album concept may actually have been over for a lot longer than it seems, since the sales numbers have been propped up artificially since the beginning of the digital age. Track equivalent-albums, where 10 downloads equal one album sale, never really represented a true album of 10 songs. Most of the time one or two songs that happen to be from the latest album release were downloaded over and over again, but to label bean counters, that somehow amounted to a purchase of a real album. Move ahead in time to the present and stream-equivalent albums (or SEA, where 1,500 streams equal one album sale) presents the same dilemma.

While this might have made a convenient apples sort-of to apples data point that made a balance sheet look good, the problem is that it doesn’t reflect the reality of 80 to 90% wasted resources, since most of the songs of an album are ignored both internally by the label’s marketing department, and by potential listeners. Still artists and labels insist on making a product that’s increasingly becoming irrelevant to current audiences.