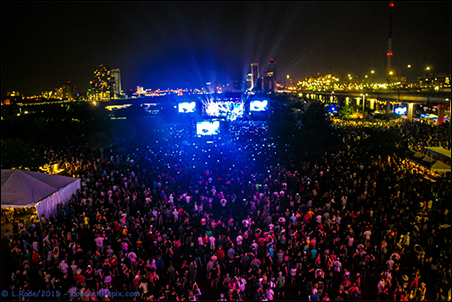 JACKSONVILLE, FL (CelebrityAccess MediaWire) — Not sure who rocked more at Rockville this year the fans or Mother Nature. Day 1 started out like a normal 2 day festival people lining up to get in, excitement for the days line up, but then the sky fell, and mother nature showed Jacksonville who could really ROCK!!! Renaming the day to “MUDVILLE” or “WETVILLE” by fans on social media, the fest was shut down the first time, early afternoon, with tornado warnings, torrential rain and winds topping 70 MPH for over 2 hours – there were lots of doubts of ROCKVILLE being resumed that day. However a little before 4pm as Queen infamously has said “ The Show Must Go ON” and the line-up resumed going forward as set – leaving only a few bands out of being able to perform.


Then, as the lineup would have it at 5:15 Halestorm was set to take the stage – It was actually sunny out and there seemed no reason for any further delays, all was in eager anticipation for Lzzy and band to melt faces then on the screens and over the loud speakers at 5:20 it happened, another announcement rang throughout the entire festival.

Most fans were in denial, but then decided to obey the warnings, cooperate and seek shelter. When this one hit, it hit hard – there was actual HAIL during this STORM (HALESTORM lol) and tornados were reported to have touched down around Jacksonville classified as category E1’s sporting winds between 85 and 115 MPH. However, as quickly as this act of Mother Nature came in it totally left. I attribute it to the fans praying their asses off and Mother Nature heeding the call saying “I see now there’s no stopping you crazy MFr’s” and the show went on. Lzzy got to rock the drenched fans sliding and sinking in mud – but it seemed no one minded it added to the overall experience. Amazing was the fan dedication!

Even more amazing was the organization and preparation of this emergency situation – Says event creator Danny Wimmer, “You don’t want to ever actually have to find out that your emergency plan works. But we were prepared and when the decision was made to evacuate, everyone executed perfectly. I am grateful for the support we received from JSO, the Fire Marshall and Mayor Brown. The fans gave us their full cooperation and then as soon as the storms were over, got right back into having a great time. Despite the interruptions, I think this year’s Rockville gave Jacksonville a glimpse of where we’re going to take this festival in the years to come.


These evacuations were indeed handled smoothly and with out panic or incident. The meetings and training on how to handle such situations really was invaluable when it actually happened. As Danny Hayes, DWP CEO stated “when you do outdoor festivals you know its going to rain, especially in a city like Jacksonville, this being our 5th year of ROCKVILLE you know its going to happen one year, we take it very seriously and do a lot of pre-planning –we had a lot of safety meeting and work closely with local fire and police, and thank god this plan went prefect, not one incident, no injuries, no police reports. It is something we are very proud of – there were a lot of other incidental problems because of the rain (Mud, electrical concerns etc.) – as long as no one gets hurt is what’s most important, the safety of our fans, bands, sponsors, vendors and staff are number one, everything else comes second.

Previous weather incidents for DWP have encountered was only the cancellation of Carolina Rebellion one year due to wet stages. However this is the first time they had to exercise our evacuation plan and then re-evacuate again in the same day – however, the stage preparation and the crew trained to protect the equipment held off the water – the lightning and wind were the biggest concerns but was anticipated and dealt with to insure the least amount of down time.

After expanding into the EverBank Field grounds, Monster Energy Welcome To Rockville drew a record crowd of 50,000 for the fifth anniversary of Florida’s Biggest Rock Festival, held April 25 & 26 at Jacksonville, Florida's scenic Metropolitan Park along the St. Johns River. This marked a 25% increase from last year’s record high attendance of 40,000. This new expanded Rockville footprint worked in Rockville’s favor for the fans and for the unexpected much needed shelter. The bridge became a wonderful shelter from the storm for the majority of fans that decided to wait out each evacuation. The expansion also allowed for usage of the street to allow wiggle room for fans to move from stage to stage. With KORN closing out day one in the end. The fans were satisfied with the events of the day. The addition of a Ferris wheel this year called “The Wheel of Lights” (wheeloflights.com) was a fun add on – allowing myself to capture this shot at days end of SLIPNOT and approx. 25,000 fans.


The second day of Rockville had all wondering what may be in store for today’s events. However, the robust crowd enjoyed a day of temps in the high 80’s low 90’s but the breeze coming off the St. John’s made it mostly tolerable and produced a beautiful day of music. So many incredible performances rocked Jacksonville’s core. High lights were Slipknot, Korn, Godsmack, Marilyn Manson, Slayer, Ministry, Slash featuring Myles Kennedy and The Conspirators, Breaking Benjamin, Papa Roach, Halestorm, The Pretty Reckless, Of Mice & Men, and many more. Bringing ROCKVILLE fans to rock euphoria. – by Laura L Rode