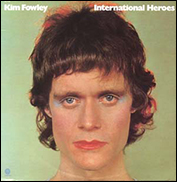 That's right, when he was a teenager he knocked up his girlfriend
and by time I spoke with Kim in Manchester they were in their forties.
Balding accountants if I remember correctly, he had little contact
with them. And I'm not sure if the point of my story is the famous
are sui generis renegades or that those writing obits don't know
these people who will usually tell you everything if you just ask.


I was sitting next to him in a restaurant. Manchester, England,
England.


That was Tony Wilson's specialty. You should watch "24 Hour Party
People," it's not fully accurate but you'll learn about the scene
with all the bands that were huge in the U.K. that never made it over here.
About the Hacienda nightclub which went broke because who wants to
buy drinks when you're listening to dance music?


And Tony was not afraid of drugs, he did his share.


And every year he had a conference, In The City, where he'd invite
those who never get to go to the usual suspect conventions. Like Hank
Shocklee, who worked with Public Enemy. He was right there, you could
talk to him.


And Mick Rock, the photographer, and all kinds of icons you know
from the credits but never seem to run into on the street.


In the seventies and eighties you'd occasionally see him around. He
was tall. He looked like a cross between Richard Kiel and Frankenstein. He was imposing.


But up close and personal…I wouldn't exactly say he was a
pussycat, but he was engaging, he didn't boast, but if you asked him
questions he was glad to wax rhapsodic and add to the myth.


And what shocked me was the story of the twins.


And Kim told a good story. About the contrast between his family and
hers. I think they got married, but it didn't last long. And then he
had nothing to do with his kids, he was off in his rock and roll
lifestyle.


But rock and roll never forgets. And neither did Kim Fowley.


And what Kim did best was embellish his legend. He was from an era
where publicity was about manipulation and the only people who knew
the truth were those who were spinning. An era when the legend was
more interesting.


And Kim Fowley turned the Runaways into legends. Even though they
never had a hit. The albums had no chance. They came out on Mercury, which was even worse than RCA.


And this was in an era when if radio didn't play it, it's like it
didn't even exist. Few purchased LPs they hadn't heard previously,
especially when the reviews were not spectacular.


So Kim Fowley willed himself into being a star.


But underneath it was a passion for the music, and the hustle.


He was a character.


And the truth is the music business is still run by characters.


Pay attention to those playing with their own money. They have tales
to tell.


And Kim Fowley told me quite a few that night nearly a decade back.


I can't remember them all.


But I've had a soft spot for the gentle giant ever since.