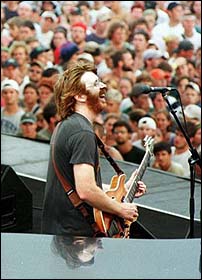 The program began with Phish's four sold-out year-end concerts at New York's Madison Square Garden (December 31) and Hampton Coliseum in Hampton, Virginia (January 2-4) — the Vermont-based band's return to the stage after a two-year hiatus. All four shows are available for purchase and download within forty-eight hours of the end of each show. Phish plans to offer more new and archival shows through the service throughout 2003, including some or all of Phish's sold-out February 2003 tour.

All music files come without Digital Rights Management (DRM) and are compatible with Windows, Mac and Unix operating systems, allowing for maximum flexibility and ease of use. Once downloaded, shows can be burned to disc, transferred to portable players, or played through a computer. Each show also comes with custom-designed printable booklets, inlay trays, and CD labels if a user elects to burn their files to CD.

To celebrate the launch of this service, Phish's October 7, 2000 concert at California's Shoreline Amphitheater was available for free MP3 download until January 1. In addition to giving Phish fans a great show to add to their collection, it also allowed fans a chance to test drive the system. Fans that register with Live Phish Downloads can choose to be notified by email each time a new show is available for download.

Phish's latest studio album, "Round Room" was released by Elektra Records on December 10. The band performed on Saturday Night Live on December 14, when the show garnered its highest ratings of the season. Live Phish Downloads will exist in conjunction with the Live Phish CD series, offering fans a chance to buy Phish shows online and in stores. The next wave of Live Phish CD releases is expected to hit stores in April of 2003.

Live Phish Downloads is a cooperative effort between Phish, Elektra Entertainment Group and nugs.net, a popular music site. The site was designed by The Chopping Block and is powered by PatchBay, a CinemaNow technology solution.