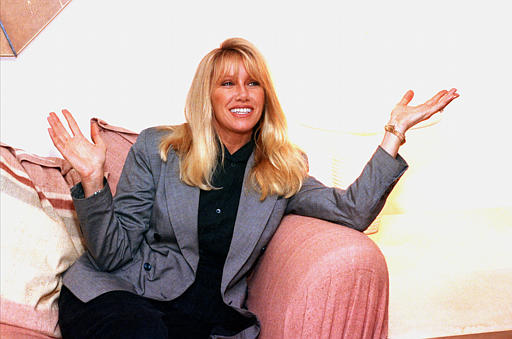 Suzanne Somers, an actress, comedienne, singer and New York Times best selling author, is set to tour in the 2003-2004 season in "The Blonde in the Thunderbird," a one-woman theatrical extravaganza of her life written and directed by the Emmy-Award winning team of Mitzie and Ken Welch. It promises to be a revelatory look at Suzanne’s life as well as a celebration of her personal triumph over adversity. The
show combines film and video clips, stills, sound effects, and voiceovers
plus live music, including original songs created especially for this show,
to provide audiences with a memorable multimedia theatrical experience.

Stephan Boyd of MPI is the agent.

The show will touch on such areas of Suzanne’s life as:

Her childhood, which was ruled by her alcoholic father’s violent
mood swings, and the painful, yet healing journey that led her, and every
member of her family, to a complete recovery.

Becoming a teenage mother, breaking up with her first husband, and
watching her son nearly die in a car accident.

Falling in love with Alan Hamel, the successful, married man who
ultimately became her husband of the past 30 years.

The rocky times in their marriage as they attempted to blend their
families together and were forced to deal with the anger and resentment of
their mutual children.

Landing the part in American Graffiti that launched her career.

Her heady days of stardom on "Three’s Company" and her eventual
firing from that show when she became the first female star to ask for the
same pay as male TV stars, and how, for the better part of the next decade,
she was unofficially blackballed from television because of that incident.

Her resurrection as an entrepreneur, best-selling author, and, once
again, television actress.

· Her recent battle with breast cancer.

Suzanne states, "After writing two autobiographies, Keeping Secrets and
After the Fall, I’m at a place in my life where I would like to share my
personal journey with people in a more intimate manner. I plan to "tell it
all" as a way of offering inspiration and hope to others who may be facing
difficult challenges in their lives. This show is a celebration of finding
yourself despite the odds. "

Mitizie and Ken Welch add, "We’ve known Suzanne for years and to be able to
work with her on this project is both exciting and rewarding. This show is
unlike anything we’ve ever done before in part because of her openness about
her personal life. People will be surprised at the versatility of her
performance as she portrays a variety of characters and moods."