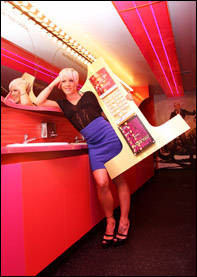 BRISBANE, Australia (CelebrityAccess MediaWire) — P!NK is the biggest selling artist in the 23 year history of the Brisbane Entertainment Centre. The rocker now has a permanent tribute at the venue.

The Door 6 female toilets have received the “P!NK” treatment and will now serve as a reminder of the phenomenal success of her “Funhouse” tour in 2009.

The toilets will be now be known as “P!NK Ladies” and the artist herself was on-hand last night to cut the ribbon (pink of course) prior to going on stage for her 10th and second last concert at the Centre.

P!NK was absolutely thrilled by the gesture of the Brisbane Entertainment Centre to honor her in such a unique way. During her show last night she told the sell-out crowd: “By the way, if anyone needs to pee later on, I have a toilet upstairs dedicated to me. I want you all to christen it.”

Ms McNamara said that more than 127,000 fans had attended 11 sold-out concerts (in June, July and August) in Brisbane, smashing all previous records at the Centre.

“To sell out 11 concerts is outstanding and P!NK should be congratulated. The ‘P!NK Ladies’ symbolizes that success and pays tribute to the artist for what she has achieved in Brisbane.

“P!NK is now etched into our rock and roll history and we won’t ever forget this extraordinary feat. P!NK is our number one and she is Australia’s brightest star,” she said. –by CelebrityAccess Staff Writers