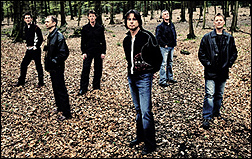 LOCH NESS (CelebrityAccess MediaWire) — Wet weather plagued Runrig's Highland 2007 festival, leading to several fans being treated for hypothermia and a temporary bridge to the site to be closed reported the Inverness Courier.

Despite the inclement weather, an estimated 15,000 fans came out to Borlum farms in the community of Drumnadrochit, near Loch Ness Scotland. Acts performing at the event included Runrig, Wolf Mother, Great Big Sea, Aberfeldy, Julie Fowlis, The Red Hot Chili Pipers and The Vatersay Boys.

Torrential rains caused concern among police who were forced to close a bridge connecting a pair of parking lots to the festival grounds. An alternate route was established to allow patrons to leave early. Police made four arrests for minor offenses at the event but Drumnadrochit Superintendent David O'Connor commented that "Overall, the event was very positive. I think there is something about the Highlands — we are very much of the attitude that the show must go on. There does not seem to be an event this year, where there has not been rain." – CelebrityAccess Staff Writers