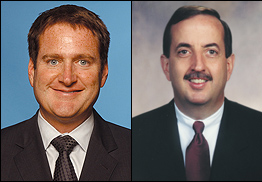 John O’Reilly, formerly Senior Vice President and Chief Financial Officer for PS&E, began with PS&E in 1999. His responsibilities include PS&E and Detroit Pistons Accounting & Financial Operations and overseeing the Box Office, Information Technology and Merchandise Operations for both organizations.

Prior to joining PS&E, O’Reilly was the Vice President of Guardian Energy Management Corporation, a wholly owned subsidiary of Guardian Industries Corp. During his 16 years of Guardian employment, he had various roles, including the financial planning and creation of an operating subsidiary to develop and operate natural gas and oil investments. Other previous employment includes Coopers & Lybrand, Winkelman Stores and Comerica Bank.

O’Reilly resides in Northville, Michigan with his wife Vicki and is the proud father of three adult children. He enjoys traveling, classic cars and wine.

Peter Skorich’s association with The Detroit Pistons began in 1976 as a ball boy when the team called Cobo Arena home. He moved with the Pistons to the Pontiac Silverdome and was hired in 1981 as the team’s Executive Producer. In 1989, a year after the team moved to The Palace, Skorich was promoted to Director of the Multimedia Communications Department. Most recently, he served as the organization’s Senior Vice President of Broadcasting & Multimedia.

As Executive Vice President of Broadcasting and Multimedia, Skorich is responsible for the management of The Palace Television Centers, in-arena game and event presentation, and serves as the Director and Producer of Pistons television shows as well as oversee all future television and broadcasting endeavors. His department has won a total of 20 Michigan Emmys.