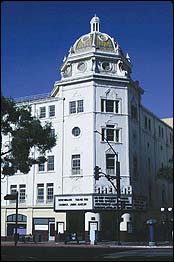 SAN DIEGO, CA (CelebrityAccess MediaWire) — The historic Balboa Theatre is just a few months away from a grand reopening. The vaudeville-era 1,300-seat live performance theater in the heart of downtown San Diego is listed on the National Register of Historic Places.

After numerous unsuccessful efforts over the past 18 years to renovate and reopen the Balboa Theatre, the Centre City Development Corporation (CCDC), the public, nonprofit corporation created by the City of San Diego to oversee downtown’s redevelopment, is nearing completion of the $26 million restoration project to return the venue to its original glory. The restoration is being completed in collaboration with the award-winning architectural firm of Westlake Reed Leskosky of Phoenix, Arizona. Scheduled for early 2008, the grand opening festivities will include a Roaring Twenties-themed gala, public tours and more.
“Like the Balboa, Downtown San Diego has undergone a great transformation. Prese rvation of this magnificent building is extremely important for the future character of the city,” said CCDC President Nancy Graham. “The Balboa Theatre is a testament to San Diego’s thriving arts and cultural community and CCDC is committed to restoring and returning this treasured icon, in its original grand style, to all who live, work and visit here.”

History
Named for the Spanish explorer Vasco Nuñez de Balboa—the first European to discover the Pacific Ocean in 1513—the Balboa Theatre thrived from its opening in 1924 through 1930. The Balboa hosted nationally recognized vaudeville acts, including the Sunkist Beauties and Fanchon & Marco, who performed on opening night. Some of the biggest movie stars of the time also appeared at the theater, making it the centerpiece of local culture and entertainment.
In 1930, it was renamed El Teatro Balboa and underwent a modest renovation that enhanced the Spanish Revival architectural features and added a neon mar quee. El Teatro Balboa showed Spanish-language cinema and stage shows until the early 1940s, when the U.S. Navy appropriated the office space to house sailors during WWII. The building was almost demolished in 1959 to accommodate a parking lot, but was spared by Russo Enterprises, which bought the building and operated it as an action-movie venue. The City of San Diego placed the Balboa Theatre on the local Register of Historic Places in 1972, and in 1985 CCDC acquired the property by eminent domain. In 1996, the Balboa Theatre Foundation, a nonprofit committed to preserving the theatre and local arts and culture, successfully placed it on the National Register of Historic Places.

Design
The theater originally was built for $800,000 by the Balboa Building Company and William Wheeler served as the design architect. The theatre's interior reflects 1920s design sensibilities, blending Mediterranean Classicism with Moorish and Spanish Revival styles. Two elevated, recessed waterfalls flanking either side of the proscenium opening are unique features of the Balboa Theatre. The auditorium chamber was described as a "glittering jewel box," because of substantial use of bronze metallic wall paint. The ceiling includes ornate and gilded plaster grillwork that funnels sound throughout the building. One of the theater's unique performance-related design features is an oversized orchestra pit that can accommodate 30 to 40 pieces with easy access. Due to the theater's design, it possesses excellent acoustical qualities for live, unamplified performances. The Balboa Theatre Foundation is restoring a beautiful Wonder Morton Organ, one of only five of its kind in the entire nation, which will be installed in the theatre.
Completed in several phases, the project has been designed and orchestrated by national historic restoration and performing arts specialists Westlake Reed Leskosky of Phoenix, Arizona, incorporating architectural and enginee ring disciplines with related interior design and theater technical and historic restoration specialties. The firm’s work on the Balboa Theatre illustrates the successful results of integrated design and a process that included peer review, ongoing-cost estimating and value engineering, allowing the project to stay within budget while continuing to move forward.
New state-of-the-art mechanical, electrical, and performance systems such as rigging, lighting, and audiovisual technology have been installed, including full-variable acoustics. The lobby, box office, loading area, and public amenities have been improved and expanded. The audience chamber and balcony have been revitalized with new seating and restored decorative ceiling and walls. Enhancements also included the recreation of the blade sign and marquee, the addition of an orchestra pit lift and orchestra side shell panels. The structure is reinforced for seismic stability.

Grand Opening
When it reopens early next year, for music, dance, film, theatre or formal gatherings, the historic Balboa Theatre will once again lend its magic to downtown. Following the opening it will be under the management of San Diego Theatres Inc. – CelebrityAccess Staff Writers