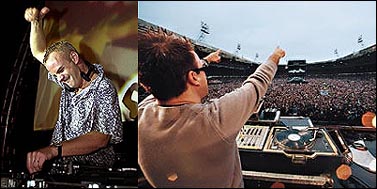 Superstar DJs FATBOY SLIM and PAUL OAKENFOLD are planning club tours of cities in the Far East to coincide with this summer's soccer World Cup.

The DJs have both booked gigs in Japanese cities where England will be playing this June in the first round of the World Cup competition. They will also appear together for two shows in Tokyo.

Speaking to BBC's Liquid News show, Fatboy Slim said: "Me and Paul Oakenfold are the only two people who had the idea. We booked up all the venues and we're doing a couple of gigs together in Tokyo.

"We've got gigs around the matches that England are playing in the same cities, so either the day before, or the day after or the night before the match I'll be doing a show," he added.

"I know it's a cliche, but I'm probably bigger in Japan than I am here. It'll be the first time ever I've witnessed a World Cup."

England's first match is against Sweden in Saitama on June 2. They also play in Sapporo and in Osaka.