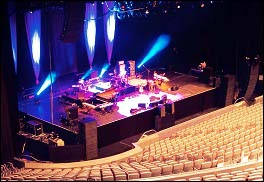 SYDNEY (VIP NEWS) — The Sydney Entertainment Centre, for many years the biggest arena in Australia's largest market, is facing the wrecking ball.

The New South Wales Premier Barry O'Farrell today confirmed the site would be demolished in late 2013 as part of a "complete facelift" for the site on the city's scenic Darling Harbour.

According to reports, the integrated convention center will increase the size of the existing precinct by two-thirds to 20 hectares and will include the largest exhibition space in Australia at 40,000 square meters. Plans include a premium entertainment facility with a capacity of more than 8,000.

The redevelopment of the precinct in the scenic Darling Harbour will take up to three years and will top $1 billion Australian ($1.03 billion). O'Farrell reckons the economic benefit will meet that outlay within five years, on the proviso that the site raises its game in the conventions industry.

"NSW has already lost $150 million (US $155 million) in economic benefit over the four years to 2010-11 because the current facilities have not been able to accommodate 169 conventions and 12 exhibitions," O'Farrell added.

If there is a winner from the SEC's shuttering, it's the venue's cross-town rival the Allphones Arena (formerly Acer Arena), which stands to pick up most of the big shows which come into town.

Competition aside, the iconic SEC has endured a troubled recent past. The venue was caught up in the collapse of its former operator Kevin Jacobsen's Arena Management, which entered into administration back in 2009 with spiralling debts estimated at around $10 million Australian ($10.3 million). In August of that year, the venue's owner the Sydney Harbour Foreshore Authority evicted Arena Management, which had leased the 12,500-capacity venue since it was opened to the public in November 1983.

Soon after, the Darling Harbour Convention and Exhibition assumed management of the SEC, and appointed a team led by venues veteran Steve Romer to take charge of the facility. Romer couldn't be reached for comment at deadline.

For the time being, it's business as usual at the SEC. Upcoming bookings include dates by Radiohead, Florence & the Machine, Jason Derulo and the Black Keys.