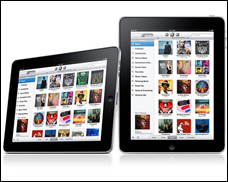 CUPERTINO, CA (Hypebot) –
The iPad's first days sales including pre-orders are said to be in the 600-700,000 range according to an analysis by Piper Jaffray who now estimates first year sales could top 5.5 million. (Apple officially says that they sold 300,000) By contrast first day iPhone sales were just 270,000, in part because of supply issues.

But what all this means for music is far from clear. The iPad launched without any kind of music in the cloud service, though one appears to be in the planning stages for later this year. The potential for more robust and even interactive music experiences are enhanced with the iPad, but to date iTune's LP and imitators have shown more promise than fan interest.

He cites the free Rj Voyager iPad app that "lets you modify the band’s music as if you were a sound engineer or pro DJ. The app heralds a future where users are constantly tweaking and personalizing the music they currently just listen to, and also hints at a world where music apps will adjust to a user’s surroundings through sensors on the device."

And in a warning that should sound familiar to the heads of major labels, some reviewers are reminding consumers that Apple likes to be in charge of everything that runs on its devices. In this case since all apps require Apple's approval, the iPad is a closed and even censored eco-system that could inhibit commerce and creativity.