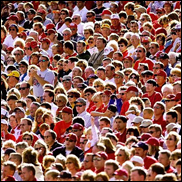 We’ve got to get more people to go to more shows.

It’s not like it’s a hidden lesson. The cell phone companies learned this long ago. You drop the price, you get more people signed up. My ex-wife had a cell phone twenty years ago. It cost $1100 and calls were a buck a minute. Cell phones were rare. You needed to be rich or have a justified use or both. Then they dropped the price and now nine year olds have cell phones. With texting plans. And paid for ringtones. As concert ticket prices keep going up and up, we’re driving potential customers away.

Jay Scavo said venues should have a season pass. And just to prove that he was wrong, Don Strasburg said he’d sell ten season passes to the Boulder Theatre for $300. Don ended up only offering four. For $400. And they were gone in an hour and a half. Sold purely by a banner ad on the Website.

There are two elements to this: The actual URL which is hypebot.com. The argument of target=new forces the link to open in a new browser window. The second part, >hypebot is how the link will display on the page. You can put whatever you like in there really, it doesn't need to actually reflect the url.

No e-mail blast. Actually, Don doesn’t send an e-mail blast unless you can win something. Usually tickets. And if it’s a really slow show, this is how he papers the house. Who, other than AEG and the act, would know how many are given away. Brilliant idea, but I think the concept of a season pass is even better.

Michael Rapino says that the average Live Nation customer goes to a show fewer than two times a year. Live music is not a regular habit, but a special event. Hard to make your numbers on a

once a year transaction. The key is to get people to come more. And spend more, on merch, peanuts, popcorn, beer…

I’m not talking about those special sales. Discount tickets close to show date, four packs… Those devalue the music. But how about a pass to the club, where the developing acts play, sold in advance, for $150. Or maybe $200. Suddenly, it truly is a club. It’s not about where the act you want to see plays, but a venue you’ve got an investment in, that you own. It’s YOUR PLACE!

That’s social networking in the physical world. You own a little piece of the rock. And you’ll go on a Tuesday night to hear an act you’ve only read about. Or the one with one single you like, but you wouldn’t pay full price to see.

All this b.s. from the big players. That’s all about the classic acts. They’re the only ones who can sell tonnage. You overcharge, you fuck the customer in the ass, it works for a while. But have you noticed we haven’t developed any new arena acts? Stadium acts?

Marc Reiter said he used to go to SPAC, the Saratoga Performing Arts Center, many times during a summer. Because lawn tickets were $7, and a movie was $6. Music needs to be a good value. It hasn’t been a good value for in excess of a decade. Ever since Robert Sillerman rolled up the regional promoters into SFX. Now prices are high. It’s like sports. But music ain’t sports. And I won’t go to a baseball game on a whim anymore. Used to be $3 and you sat in the

upper deck or bleachers and got fucked up and who gave a shit about the game. Now, you’re pissed if you go and the game is shitty. Because you paid a fucking fortune! But, at least the teams are classic, they don’t change. We’re trying to break acts in the music business. We can’t overcharge.

We need some innovation.

Strasburg said he couldn’t sell more passes because the agents would complain. But Wayne Forte said it could be like a performing arts center, you just break the season ticket price down per show. He was fine with that. Frank Riley was fine with that.

Where’s the innovation? Enough with the marketing ideas, how to put new lipstick on the pig. How about a whole new paradigm? Music should be experienced by everybody. It should not be a rare event. We’ve got to train people to come. By enticing them to experience new music. A season pass is a great idea. Ski areas do it. Disneyland does it. How come it can’t be done in the concert business?

The record labels said no one would want to download music from the Internet, that everybody wanted CDs. Is the concert business so entrenched in the way things have been that no innovation can take place?

Maybe if you get a season pass, you can download an MP3 from every act playing the venue. Maybe if you have a season pass, you get a guaranteed seat at the stadium show, which is akin to fan appreciation night, where the promoter gives back and the best of the new acts perform. Strasburg said today’s youth want to hang out together, they want to party. Reward them by allowing them preferential treatment, guaranteed admission to the super-exclusive show.

Going to hear music used to be a casual event. Something everybody in society took part in. Now it’s exclusive. Look what happened when the record companies made music exclusive. CDs were so expensive that most people rarely bought one, and if they did, they did so rarely. Sure, the junkies bought a ton. But the key is not to live off the junkies, but the public at large. Like the cell phone companies. Nine year olds should not only be experiencing Hannah Montana. And fifteen year olds shouldn’t only be experiencing Taylor Swift. And even baby boomers should not only be experiencing the Rolling Stones and the Eagles. Focus on the youngsters first, they’re the most impressionable, the ones who need to be there and want to take a risk. But get everybody talking about music. Then everybody gets rich. Not only the purveyors, but the listeners. A great live show is etched in your memory forever. Come on, you can testify about so many shows. But first and foremost, you have to be IN THE BUILDING!