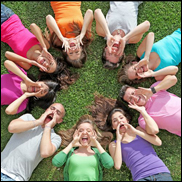 But it just doesn’t happen that way anymore.

Everything starts from the bottom up. If you believe the opposite, you’re still living in the twentieth century.

So what you’ve got to do is woodshed and send your stuff to ten friends. And if they don’t tell others, if nothing happens, the problem is you.

Oh, I know you don’t want to hear this, you don’t want to self-examine, but your only other option is to get new friends or to struggle in oblivion. But to delusionally believe it’s about getting a big shot to push you…you’re wrong. That’s one of the reasons labels always ask young acts what they’ve got going on. They want to build on the fan base you’ve already established.

Seth says the key is to do work that matters, and to make enough money to survive doing it.

I know that’s not the modern paradigm, where everybody’s looking for world domination. But the question is, is that fulfilling?

Yes, I’ve changed topics. But that’s one thing that’s been left out of today’s discussion. I know plenty of people doing work I’d rather die than do. Like working in the Dakota oil fields. So you work like a dog, make money, ruin your relationship and..?

Now we need people to do menial jobs. But I don’t think those are the people reading this. You’re looking for something more. And yes, some people win the artistic lottery. But very few. If you want to survive, maybe you have to take your eyes off the prize. As far as getting picked, it happens long after you’ve done the work, when you’re no longer even trying.

Yes, the media has a herd mentality. You rise above the fray because your fan base can’t stop talking about you and suddenly everybody wants to write about you. That’s the story of electronic music in America. It’s not like there was a PR czar. As for the usual suspects…the major labels and Live Nation and AEG weren’t in it. No, the story of EDM grew as a result of the incredible success of the Electric Daisy Carnival, by selling tickets. If your ten friends tell ten more and it never stops…you’re gonna get a huge audience. That’s the story of the Dave Matthews Band, playing in a bar, opening for jam bands many have never heard of. But everybody exposed to the music told everybody else.

It’s kind of like mix tapes. They don’t write about them in mainstream media, but that’s where those who really care about hip-hop pay attention, and it’s from there that new rap stars are born.

But everybody wants a short-cut. Believing the game is rigged against them. That they just haven’t got enough money or any relatives in the business.

But it’s not that way anymore.

You’ve got the means of production and distribution at your fingertips, they’re close to free. And if you’re not getting a reaction, if your friends are not spreading the word, the problem is you.

P.S. Seth also talks about being afraid. But it’s when you’re vulnerable and taking a risk that you truly get a chance that people will react. In other words if you’re self-censoring, you’re making a mistake. As for mistakes…you can always recover from them, especially early in the game. You can make more music, write more blog posts, this is what is called a “pivot” in the tech game. How will you know what works or what doesn’t if you do not play?

“Seth Godin: The Art of Noticing and then Creating”

-you want the unedited version