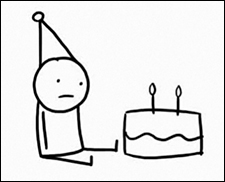 (Hypebot) – While many may have hoped that the saga of Happy Birthday's copyright (or lack thereof) had finally come to a close, the ambiguity of the ruling has caused both sides to issue a joint status report stating their wish that the case continue.

Last month, as you may recall, Judge George King said that Warner/Chappell did not hold a valid copyright in the lyrics to the song "Happy Birthday." Many news reports falsely claimed that he had declared the song to be in the public domain, but that's not what he said at all. As we noted, all this really did was turn the song into a giant "orphan work." And, of course, there's the simple fact that this is just a district court ruling that is likely to be appealed.

Recent filings have shown that both sides would like the case to continue, though in different ways. In a joint status report filed by both sides, the filmmakers (who want to use the song as the basis for their documentary) are asking the court to go through with the trial in order to make a final call on whether the song is really in the public domain:

Plaintiffs believe the Court should determine whether Happy Birthday is in the public domain together with its determination of Claims II and III of the Complaint (as to which there is no right to a jury trial). Plaintiffs believe that further proceedings on Claim One will not materially advance the ultimate disposition of the litigation.

And now, Warner/Chappell has basically asked the judge to reconsider the big ruling, or alternatively, to let them go straight to appeal on the issue of the validity of the copyright.

Warner/Chappell respectfully requests that the Court either reconsider the September 22, 2015 Memorandum and Order Re Cross-Motions for Summary Judgment (Dkt. No. 244) (the “Order”) or certify the Order for interlocutory appeal. Warner/Chappell makes this Motion with due recognition and appreciation for the substantial time and effort the Court invested in resolving the summary judgment motions. Warner/Chappell nevertheless believes that the Order satisfies the standards for reconsideration or certification.

The main argument by Warner is basically: "but, you're just supposed to assume the copyright is valid."

Courts uniformly apply the presumption of validity where errors in registration are non-fraudulent and immaterial. That rule applies where the registration omits or misstates an author, because that is an immaterial error…. That rule applies here. Registration E51990 identified as author Preston Ware Orem (author of the arrangement) but omitted the name of Patty Hill, who (the fact-finder could conclude, Order at 18-19) authored the “text” that the application claimed and that (the fact-finder could conclude, as shown) constituted the “familiar” lyrics of Happy Birthday. The registration claims copyright over both the “arrangement” and the “text,” (J.A. 48). Hence, the most that can be said is that the registration omits the name of all co-authors.

The Order effectively creates a rule that the omission of the name of additional co-authors deprived registration E51990 of any prima facie evidentiary presumption that Summy was authorized to publish and register the Happy Birthday lyrics. That was clear error under the applicable authorities. The omission of Patty’s name was immaterial: there is no basis in law, logic or evidence to believe the Copyright Office would have done anything different with the registration had her name been included. There is no evidence or even any contention by Plaintiffs that the omission was an attempt to defraud the Copyright Office. Even if Plaintiffs presented evidence that Summy was not authorized to publish and register the lyrics, the evidentiary effect of the prima facie showing would not disappear. The dispute, at most, would create a triable issue of fact.

But that's bogus. The wrong name on the application was only one issue, and a small one at that. The much bigger issue is the fact that it does not appear that the copyright registration in question really did apply to the lyrics. The Court focused mostly on a later legal dispute between Summy and the Hills, none of which would have made sense if the Hills really had transferred the copyright in the lyrics to Summy. Warner's response to that is to argue that the Court chose to ignore language in the agreement between the Hills and Summy. Accusing the court of ignoring language probably isn't going to make the court very happy, but I guess when you're desperate to keep a totally bogus $2 million+ revenue stream flowing, you gotta trying something. But, of course, the real idea here is to move it up to the appeals court:

If the Court does not reconsider the Order, Warner/Chappell respectfully requests that the Court certify it for interlocutory appeal…

In short: this is not over yet. Stay tuned.