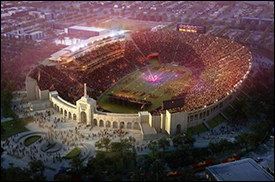 USC's $270 million renovation plan, if approved by the commission that oversees the coliseum, would start after the conclusion of the 2017 season and be completed by 2019, according to the Los Angeles Times.

The Coliseum, which first opened in 1923, saw its last major refurbishment in 1993 when the school spent $93 million on repairs to the facility in the wake of the Northridge earthquake.

The proposal includes plans for replacing every seat in the stadium, adding a new structure on the south side that will include VIP suites and a new press box, and upgrading the stadium's sound system.

"The proposed renovations place significant emphasis on improving and creating new amenities for ALL visitors and fans, as well as creating upgraded seating options that strengthen the LA Memorial Coliseum’s reputation as one of the greatest venues in college football. In addition, it will only enhance our ability to recruit and train the nation’s best and brightest student-athletes, and enable us to build upon a game day environment that is second to none," a spokesperson for the school said in an announcement about the planned upgrade.

The entire cost of the $270 million renovation will be privately funded, however the school is still in the process of securing that funding. The plans require approval from the Coliseum Commission, a three-member panel representing the city, county and state, that oversees the arena, which is not expected to vote on the measure until spring 2015. – Staff Writers