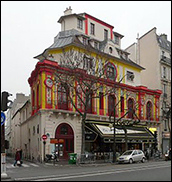 PARIS, France (CelebrityAccess) — A sold-out concert by the American rock band Eagles of Death Metal was one of the targets in a wave of coordinated terror attacks unleashed across the city of Paris on Friday night that has left more than one hundred people dead and hundreds injured.

According to the New York Times, 89 people were killed at the Le Bataclan Theatre, after three armed men entered the venue and began to indiscriminately fire on and throw hand grenades into the crowd of more than 1,500. A radio reporter, Julien Pearce, who attended the concert, described the attackers as calm and determined, telling CNN they had reloaded three or four times.

Next the attackers began to round up hostages and after they reportedly began to execute more victims, French police stormed the concert hall. Two attackers were killed by police gunfire and a third detonated a suicide vest, the BBC reported.

“The men shot at the audience, which lasted for about 10 minutes, with one shot lasting three or four seconds,” journalist Julien Pearce, who witnessed the attack told Europe 1. “They shot, recharged their guns, and shot again, even aiming at those already lying on the ground. I saw about 10 bodies lying on the ground, but couldn’t tell whether they were injured or dead.”

Previous reports had put the death toll at the theater at more than 100 victims, but that has since been revised.

The Eagles of Death Metal, who were performing at the time of the attack, managed to escape from the theater unharmed, but the band has since confirmed their merchandise manager Nick Alexander was killed in the attack.

Austrian rock group White Miles, who were supporting the Eagles of Death Metal at the show, also escaped unharmed.

A second attack occurred when a series of suicide bombs were detonated near the Stade de France stadium north of Paris, where a football match between France and Germany was taking place. Explosions were heard during a live, televised broadcast of the match and at least 10 people were reported to be killed. French President François Hollande was attending the soccer match and was hastily evacuated, according to the New York Times. 6 people were killed in the attack.

Following the attacks, President Holland declared a state of national emergency and closed France's borders to all travelers.

"It's a horror," President Holland said during a televised address. “Two decisions will be taken: a state of emergency will be decreed which means certain places will be closed, traffic may be banned and searches may also take place throughout the Paris region.

“The second decision I have taken is to close the borders. We must guarantee that no one can come in to commit any act. And at the same time those who may have committed crimes can be arrested if they try to leave the country.” – Staff Writers