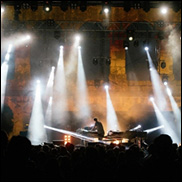 HACKENSACK, NJ (CelebrityAccess) — LiveU, the IP-based live video services and broadcast solutions for acquisition, management and distribution, has announced that it has formed a partnership with global music event web broadcaster Boiler Room. The partnership is both promotional and technical, with Boiler Room deploying LiveU technology while also promoting LiveU as a partner brand. The deal is being overseen by LiveU's UK partner Garland Partners Ltd.


Boiler Room first emerged in 2010 and has becaome a cultural phenomenon in the online music world. It streams live music sessions from around the globe to an audience of fans and concentrates on bringing a true sense of the event – specially arranged by Boiler Room – showcasing the band or DJ, the music and the atmosphere.


Larry Gale, Boiler Room's Head of Broadcast, said, "Boiler Room is a community – it fits somewhere between television and radio but we're trying to do something that's different to both. We are focused on streaming the highest quality music experience to our audience, and LiveU ensures that we can do that, from anywhere with 3G/4G signal."


Most events are streamed live, and then looped for two or three days before being offered via online VoD access. Some events go straight to VoD, usually due to DJ requirements or filming logistics.


Larry Gale added, "LiveU allows us to do things now that we simply couldn't do before. Five years previously, I worked on a similar project to Boiler Room and we were tied to venues that had a decent internet connection. Historically for us it's been very difficult to bring artists to us; it's been much easier for us to go to them. Connectivity is our often our biggest challenge on location, as the venues for our events have to be special. With LiveU we can expand our reach and be even more adventurous."


Boiler Room has offices in London, New York and Berlin and while a large portion of its events are held in or near those cities, it organizes parties from Japan to Mexico, Brazil to Australia with new venues added regularly.