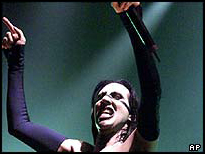 BUDAPEST (CelebrityAccess MediaWire) — According to the BBC and the Budapest Times US shock-rocker Marilyn Manson stirred up religious ire as church groups accused the singer of Satanism and corrupting young people ahead of the Budapest leg of his Against All Gods tour.

The Christian Public Life Academy issued an open invite for people to come to a protest meeting outside Mátyás Church before the singer took to the stage, and several hundred people braved the rain to register their disgust through prayer. Standing in front of the statue of the country’s founder, King Saint Stephen, speakers from the academy and other religious groups accused Manson of intending to burn Bibles during the performance and called him “Satan by another name.”

“Manson’s concerts are a revised form of Satanism and more of an occult event than a performance,” Péter Morvay, editor of religious weekly newspaper Hetek and member of the evangelical Faith Church in Hungary, told The Budapest Times and Budapester Zeitung. “However, trying to stop a concert doesn’t make sense, as we are a free country, but he will fail in his mission to corrupt here.”

Others displayed a more aggressive attitude. Róbert Szikora, a prominent Christian musician with rock group R-Go, told the tabloid Színes Bulvár that “if I see him in the street I might put aside my Christianity and smack him in the mouth with a stick.”

“It’s unbelievable that a country of eight-and-a-half million Christians is allowing this concert to go ahead,” he said.

However, László Hegedûs, director of Multimedia Concerts Budapest – who organised the Manson concert – was scathing of the protests. “The complaints are from religious preachers who simply want publicity. Marilyn Manson isn’t against God, but against organised religion,” he told The Budapest Times. “The concerts are just like any other heavy metal show, with kids dressed in black with painted faces. They’re not dangerous.”

The show in Pula, Croatia last Monday also suffered from poor ticket sales. According to the ticket agency, only one thousand fans turned up to the coastal city’s Roman Amphitheatre. Despite the apparent lack of interest in his music, Manson also faced protests before the Croatian show. Catholic priests told the Pula mayor that “Manson fans turn the site of his concerts into Sodom and Gomorrah.” A consortium of Catholic priests offered financial compensation to the city should the concert be cancelled.

However, one Catholic priest did support Manson. Anton Bobas, who plays in his own metal band, said that Manson was unlikely to make young people convert to Satanism.

Manson himself was unmoved by the criticism. “As an artist, it’s normal that I provoke,” the singer told Croatian newspaper Novi List. “If people think an artist can destroy their faith, then their faith is fragile.”