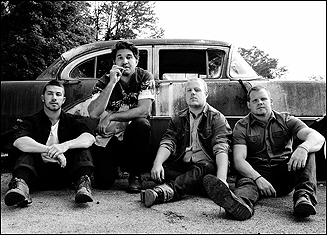 "Hey You" is the second single off their debut album, Dirt, Rust, Chaos, which will be released on May 5th, 2015.

Regarding the song, Deaf Rhino states, "Hey You is like going out on a Saturday night and not knowing what kind of trouble you're going to get into while getting after it. We think this song kicks ass because you can shake your ass to it and bang your head to it. We just hope your psychedelics have kicked in by the time the bridge comes around.

The album was recorded in just five days at The Barber Shop Studios and was produced by Brett Romnes (I Am The Avalanche) and engineered by Grammy-nominated Jason Corsaro (Soundgarden, The Ramones, Danzig, Iggy Pop). Dirt, Rust, Chaos features a heavy, melodic yet groovy sound and offers unique tones inside classic song structures with mature and introspective lyrical content. Armed with a full album, Deaf Rhino is ready to take their grassroots success to an international audience to build on their raucous and inspired live shows and loud brand of real rock and roll.

Through do-it-yourself booking, distribution and aggressive self-promotion, the band, which is comprised of Adam Schlett (lead vocals, rhythm guitar), Bobby Weir (lead guitar, Vocals), Tommy Scerbo (Bass Guitar, Vocals), Jack "Shirtless Savage" Biamonte (drums) built their own music scene in the areas of northern New Jersey and New York. With a reputation for solid stage shows, the band was able to build a solid fan base and forge relationships with such venues as Maxwell's Hoboken, Arlene's Grocery and Webster Hall.

The band, which originally went by the name Easy Company, began in 2011 as collaboration between Schlett and Weir who had previously played in cover bands together but were itching to do something more. After bouncing demos back and forth, Schlett and Weir recruited Scerbo and Biamonte to help bring some of these demos to life. The resulting chemistry from that session led each member to agree to make the musical partnership a full time endeavor.

The band recorded several demos under that moniker before heading in to the studio to record a full-length album. The finished product, Dirt, Rust, Chaos, was bigger, better, louder and more direct than ever. Because the music they had produced on that album marked a significant change in their musical identity, the band decided that they had to change their name to something that would more appropriately describe the sounds they had made. Hence, Deaf Rhino was born.