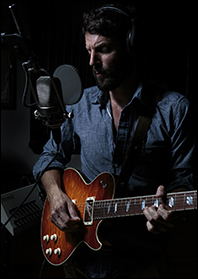 LOS ANGELES (CelebrityAccess) — Ray LaMontagne came off the yearlong tour behind 2013’s Supernova with around 18 songs he’d stockpiled prior to going on the road with the intension of developing the best of the new material for the follow-up LP. The Louisville sessions with co-producer My Morning Jacket auteur Jim James had already been booked, and LaMontagne had less than three months to get the new batch ready to cut.

“I dug into the songs for six weeks, but the current wasn’t there,” he recalls. “At that point, you have to open up the top of your head and just let it all in, but the direction was still unclear to me. One night, I went to bed but couldn’t sleep, because I was so preoccupied with what I was trying to do. When I finally did fall asleep, I had this vivid dream—I dreamt I was working in my home studio, and the music presented itself to me. I woke up feeling that it was all there, every word and every note. But it wasn’t an album of songs—it was one thing. When it materialized, I felt strongly that it wanted to exist through me. It wanted to inhabit a particular space; I sensed it had that transportive quality music possesses when it really works. It reminded me of Talk Talk’s Spirit of Eden and Laughing Stock. I called Jim and described the experience, and he told me he’d just bought Spirit of Eden and was thinking we should do something with that same spirit of exploration.

“So I very quickly made a 40-minute demo and sent it to him. After he heard it, Jim told me that that was the album, and I should release it just as it was. It was just me in my studio with no percussion, just guitars and vocals. I resisted the urge to do that—the demo was a sketch, and I needed to bring to into three dimensions. Jim and I wanted to make something beautiful, and when we played the first song in the studio with the band he’d put together, we all knew we had it already—it was speaking through the players. The album we made is the demo, note for note. The demo was very specific—it felt like a complete arrangement—and the parts on the album are the parts on the demo. It all just fit together like a puzzle. Still, there were a lot of questions in the beginning of the sessions, and when there were sounds or textures I didn’t know how to create, it was great to have Jim, who could translate the nuances sometimes better than I could to the players.”

LaMontagne titled the album—his sixth—Ouroboros (RCA, April 4), after an ancient symbol depicting a serpent eating its own tail. The new LP is his second straight collaboration with a kindred spirit. Prior to teaming up with James, he’d joined forces with Dan Auerbach of the Black Keys on Supernova. What the two albums have in common is a radical expansion of the standard singer/songwriter’s palate to encompass Floydian dreamscapes and supercharged bursts of electric guitar—but beyond these parallels, Ouroboros is a very different animal from its predecessor.


“Supernova was childlike and mischievous, like watching kids play,” LaMontagne offers. “This record feels deeper and closer—but it took me a while to translate it. The thing is, it’s not up to me. I let the songs dictate when they want to exist; I don’t force it. When it comes, it’s like Peter Pan knocking on the window.”


He approached this alchemical process from another angle in a message to fans. “The album is merely an attempt to recreate, from memory, the landscapes, the colors, the sights and sounds that were experienced,” he wrote. “I only thank God for the vividness of those experiences, and for the ease of their recollection.”


LaMontagne plays electric guitar leads and rhythm throughout the album, while James provides additional rhythm and some harmony vocals. They’re joined by Dan Dorff on keys and vibes, Kevin Ratterman on Moog and Dave Givan on drums, all James regulars, as well as multi-instrumentalist Seth Kaufman, the lone carryover from the Supernova sessions, on bass and slide. The music spun out by these six simpatico virtuosos is richly textured and strikingly dynamic—LaMontagne accurately describes it as “weightless and heavy at the same time.”


Ouroboros, which allusively recounts not simply a journey but a personal odyssey as experienced from the inside out, is a wildly evocative work as atmospheric and changeable as a summer thunderstorm enveloping the countryside of Western Massachusetts, where LaMontagne lives with his wife and two young sons, far from the madding crowd. These details are relevant, because this is the introspective artist’s most deeply personal album, and that’s saying something, given the sustained degree of intimacy of his body of work.


Beginning in a state of tranquility, Ouroboros gradually builds to an overwhelming intensity before playing out in an extended pastorale, coming full circle, like the Ouroboros depicted on the album cover. Dense with sound and feeling yet welcoming in its burnished textures and relatable emotions, the new album is unquestionably LaMontagne’s most audacious, exploratory work, his own Astral Weeks.


The musical organism LaMontagne conjured up at home and perfected in James’ La La Land studio may be “one thing,” as he puts it, but he was able to delineate and name the chapters of the narrative. “Artistically, I would’ve loved for it to simply say Part One and Part Two and have it play down that way,” he explains, “but I was trying to put myself in the place of the listener in a practical sense. I mean, the sections sort of make themselves known; one melodic part could be separated from the next melodic part or grouping.”


Ouroboros opens with “Homecoming,” in which the protagonist is called upon to rouse himself from the tranquility of his surroundings and pull away from the place where he wants to be the most. It proceeds with the agitated inner dialogue of “Hey, No Pressure” (the designated single), the tension ratcheting up with the turbulent “Changing Man”/”While It Still Beats,” which climaxes with an electrifying extended instrumental section, taking the listener to the end of Part One of the tale.


Part Two, which opens with “In My Own Way,” as the weary traveler returns home (“Lock the door. / Draw the shade,” it begins. “Close my eyes. / I’m miles away.”) is a seamless reverie, awash in sensory detail, as he grounds himself and revels in the beauty of his surroundings in the company of those he loves most. “Spring is here, then spring is past,” he sings in a near-whisper. “The sounds of summer settle in, / A snake slips through the grass.” These intimations of the metaphysical in the natural world, echoing Blake and Wordsworth, Thoreau and Whitman, play out within the album’s thematic centerpiece, “Another Day.” It’s followed by the idyllic instrumental “A Murmuration of Starlings,” setting up the final section, an aural daydream that turns on the couplet, “When I’m with you / I am right where I belong,” and concludes, playfully yet resonantly, “You’re never gonna hear this song on the radio, but wouldn’t it make a lovely photograph?”


When asked to describe the album’s prevailing theme, LaMontagne responds, “To me, there’s this emotional core in the record that almost feels like…” He stops himself, reconsidering how open he wants to be on the subject. “It’s hard for me to talk specifically about what this record means to me or what I think it means or where it comes from, because I don’t want to taint how other people bring it into their lives, if they choose to. I can say that the music didn’t fully reveal itself to me until the third time listening to the finished record in the studio, when we were putting it all together. I had no idea at the time it presented itself to me where it all came from or what was trying to be expressed.


“I’m always trying to be in the here and now and center myself and realize the truth of existence,” LaMontagne reflects. “This is such a brief moment, and everything we know as human beings is constantly changing—living, dying, being born again. We’re just a blip, a moment. I’m not religious, but I believe we’re just part of some greater spiritual force. We’re so fortunate as human beings to be able to see it and try to express it. Whatever kind of art you’re making, whether you’re a painter or a dancer, a writer or a filmmaker, all of us are just trying to figure it out for just a second, and then…who knows?”


The artist contemplates the unknowable. And the world keeps spinning through space. And the circle is unbroken.