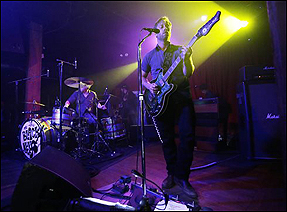 The Black Keys drummer feels he's had a tough run in the press recently, and for the first time in his career he's had to call his publicist, asking for help with comments attributed to him.

"I've learned over the last year, especially the last couple months, sometimes it's best to shut the (expletive) up and let someone else dig the hole for once," Carney said with a smile. "That's my stance on life right now. I'm chillin'. My mouth can get me in so much trouble, I know it."

He said he didn't disparage Michael Jackson, an impression left by paraphrasing, though he does have problems with the posthumous release of "Xscape" that the Keys' new album, "Turn Blue," beat out for No. 1 last week on the Billboard 200.

"And if Michael Jackson were alive, he absolutely would have crushed us," Carney, 34, said. "Let's not get confused about it. I'm well aware of that. We know our spot in the world of music."

He didn't mean to start a still-simmering Twitter feud with Justin Bieber and millions of fans just hours after the 2013 Grammys when he answered a question about the pop singer's snub at the awards.

And he has no idea why there's a growing beef with fellow Nashville resident Jack White, who in the latest issue of Rolling Stone said he thinks Carney and duo partner Dan Auerbach are ripping him off.

Carney said he believes musicians should celebrate each other's success, and said he gets along with everyone he knows in music, including Nashville's other superstar rockers, good friends Kings of Leon.

"Nathan (Followill) was one of the first people to text me when we found out we had the No. 1 record," Carney said of KOL's drummer. "And I'm always one of the first people to text him when they have something good going on. There are no bands — with the exception of one person who I won't even name who I've never met (White) — that I'm not friends with."

The dark and moody "Turn Blue" isn't radio-unfriendly — lead single "Fever" is a hit — but it's not filled with pop songs like it might have been. Co-produced by Brian "Danger Mouse" Burton, it's filled with towering guitar solos, synth, snaky bass lines and a pervading feeling of mistrust and disappointment.

It took a long time to record and isn't a rubber-stamped product meant to keep the band's platinum success rolling. Along with personal difficulties, they had a 130-date tour that left them hollow. Taking their time allowed them to disconnect from the pressure to produce more hits.

"And I think that really kind of put everything in a healthy perspective," Carney said. "… I think it could have gone off the deep end."

Most recently, Auerbach's divorce spilled over into the public. "I think that it only draws attention because we're so popular with the music," the singer-guitarist said.

"When you reach a certain level, nothing is private anymore. We just have to accept that we're at that level now. I mean we've got a No. 1 record, we beat Michael Jackson and we've got the No. 1 single on alternative for something like eight weeks now."

So they're pacing themselves. They have three weeks off for family time before heading out on a European tour that begins June 20 in Germany. They will be on the road about the same amount of time as off over the next several months, and Auerbach will take his daughter with them for two weeks.

Although the positives of fame have been mixed with unexpected difficulties, Carney said Tuesday before a small-club performance broadcast by SiriusXM that he's extremely happy. And The Black Keys are focused on making the best of pop-star life.

"You hardly ever feel settled," the 35-year-old Auerbach said. "We're going to go do this six-week tour in Europe and it's all festivals, so essentially we'll never see any of the major cities. We'll wake up in a (expletive) field every day, a muddy field with porta-potties and catering. … But that's what we do for a living. I love playing music."