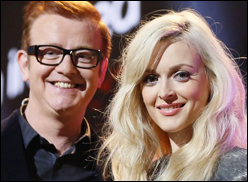 LONDON (VIP-NEWS) — The BBC Music Awards, celebrating the year`s best popular music, has been launched by the corporation as part of a wide-ranging musical strategy.

The awards will be the BBC`s biggest musical event after Glastonbury, uniting BBC One, BBC Radio 1 and BBC Radio 2 ahead of a live show with Chris Evans and Fearne Cotton.

The event will be held on 11 December at London`s Earls Court.

A panel of BBC presenters and producers will determine the best British artist and international artist awards, with viewers and listeners choosing the winning song of the year.

The awards will also feature a host of performances to review the year, as well as collaborations between well-known artists and the BBC Orchestra.

BBC Radios 1 and 2 and The One Show will offer behind the scenes access to the award ceremony.

The new music strategy was unveiled by the corporation on Monday, encompassing TV and radio programming, digital services and provisions to support emerging talent including the introduction of classical music to UK primary schools.

"Today`s the start of something very special for everyone who loves music," BBC director general Tony Hall said.

"BBC Music is a celebration of the brilliant musical talent across our country. We`ll be joining up music on television, radio, iPlayer and online like never before. There`ll be new shows, new partnerships and whole new ways to enjoy music."