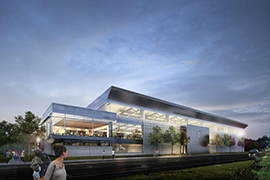 WALTHAM Mass (CelebrityAccess) — Bentley University announced the opening of a brand new, multi-purpose arena that will host the university’s sports events, as well as concerts.

The 76,000 square foot facility, designed by Architectural Resources Cambridge and built by Suffolk Construction, is located on the university’s lower campus and has a seating capacity of 2,000 seats for hockey and up to 3,400 for other community events.

Announced features of the arena include:

1,400 rooftop solar panels developed by Rivermoor Energy that will generate 40 percent of the building’s electricity needs.

Green technology that captures heat generated from creating the rink’s ice to heat water throughout the building.

An in-house media control room, designed with the help of John Mitchell, a Bentley alumnus and TD Garden control room director since 1995, that will be operated by Bentley students in partnership with faculty. The control room includes 10 high definition cameras to capture all the live action and curate content for the arena’s Jumbotron.

“Having just completed our centennial year, this arena sets the stage for Bentley’s continued success into the next 100 years,” said Bentley President Gloria Cordes Larson. “The new Bentley Arena is a sustainable investment in the future of Bentley, providing a gathering place to welcome the entire Bentley community and beyond for many years to come and enhancing the incredible student experience that is the hallmark of a Bentley education.”

The arena officially opened on February 16th with a sold-out hockey game by Bentley’s home team The Falcons.