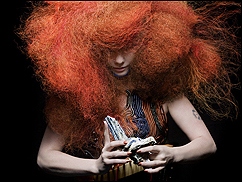 LONDON (CelebrityAccess MediaWire) — Icelandic singer Björk has been forced to pull the plug on a Kickstarter project to fund port of her music and science app Biophilia from Apple's iOS to Android and Windows mobiel devices.

Björk had been seeking £375,000 through Kickstarter, a crowdsource funding website, for the Biophilia project, which includes an album where each song is an individual app that combines a recording of a live performance with a lesson on the basics of the sceince of music. Kickstarter allows users to post details about a project and ask for donations to fund that project. If enough donations are made to meet a the funding goal, the project is funded.

"This is an odd one for me to ask of you, but it proved unbelievably complicated to reprogram Biophilia for Android and more, it will take eight programmers five months!!" Björk wrote on the Kickstarter page solicting donations.

While Björk has yet to comment on why she canceled the project, but one commentor on the Biophelia forum wrote: "375,000 bucks in around 28 days for something that has already been there (and should just be transferred to another platform)…. let's be honest: this seemed very unlikely to happen from the start without massive support from companies or the industry." – CelebrityAccess Staff Writers