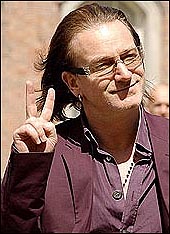 (CelebrityAccess MediaWire) — U2's Bono has a new gig. The lead singer of one of the music industry's biggest and most successful bands and a social activist, is one of six managing directors of the Silicon Valley fund, Elevation Fund. The Fund is looking to raise $1 billion for investments and acquisitions in entertainment and media companies disrupted by the Internet and other digital technologies, The Wall Street Journal reports.

The fund has been set up by Roger McNamee, a top technology investor and John Riccitiello, former president of videogame maker Electronic Arts Inc.

Because of the Securities and Exchange Commission’s mandated “quiet period,” Bono’s responsibilities in the company and the company itself, could not be discussed.

One thing is clear, Bono’s celebrity definitely brings a high profile to the fledgling fund.

Other managing directors are Fred Anderson, who recently retired as CFO of Apple Computer, and is a board member at Apple and an online auctioneer at eBay; Mark Bodnick, founding principal, Silver Lake Partners; and Bret Pearlman, former senior managing director, Blackstone Group.

U2 is currently working on a new album expected to be released before the end of the year, followed by a tour in 2005. — Jane Cohen and Bob Grossweiner