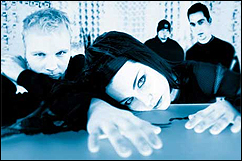 GLEN FALLS, NY (CelebrityAccess MediaWire) — Six people were arrested out outside an Evanescence concert at the Glen Falls Civic Center in Glen Falls, New York, on April 5, after police witness the group selling bootleg concert tee shirts near the arena.

The six offenders were walking around the venue’s parking lots during the concert selling the shirts. They were charged with misdemeanors of trademark counterfeiting and violating a city ordinance requiring a permit to work as a vendor, according to the Post Star.

Glen Falls Police Sgt. John Winchell told the paper that undercover city officers made the arrests after complaints from the concert promoter about the illicit sales. –by CelebrityAccess Staff Writers