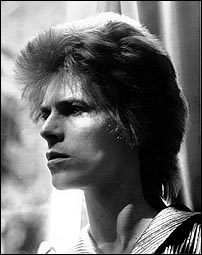 (CelebrityAccess News Service) – David Bowie's worldwide "A Reality Tour" will touch down in North America December 6 after he completes his already sold-out UK and European leg, which runs October 7-November 28. The North American dates, presented by Clear Channel Entertainment and produced by RZO Theatricals, Inc, will encompass 20-plus cities. Macy Gray is the special guest on the North American leg. After touring North America, Bowie heads over to Australia and SE Asia.

"A Reality Tour" marks Bowie's first full-fledged world tour since 1995's highly successful "Outside World" tour. Bowie and his band, who have rehearsed over 50 songs from every era of his career, will change set lists from night to night on the tour. Bowie will be backed by the same musicians he's worked with on the Reality album and performed with him on the Heathen mini-tour: Sterling Campbell (drums), Gail Ann Dorsey (bass/backing vocals), Mike Garson (keyboards), Gerry Leonard (guitar), Earl Slick (guitar) and Catherine Russell (backing keyboards/backing vocals).

In recent years, Bowie has concentrated on more intimate, one-off special live events, which have led to some legendary shows such as 2000's two sold-out shows at New York's Roseland Ballroom, last year's Carling Hammersmith Apollo show in London and his return to Berlin at the Max Schmelling Hall. Intermixed with these intimate events have been handpicked, sold-out festival dates including appearances at last year's Area2 shows in the US as well as the spectacular 1999 closing night performance at Glastonbury. This year's tour promises a mixture of Bowie's extensive back catalogue of hits as well as songs from the Reality album.

"A Reality Tour" is scheduled to play to over 1 million people in 17 countries over seven months. "Last year's shows were such a tremendous high and the audiences so responsive," says Bowie. "My band is playing at the top of its form right now and it would be foolish not to play a tour this year while we're in such good spirits about the live show aspects of our work."

Membership to BowieNet is included with every ticket sold for this tour. Ticket holders will be able to type in a special code that will appear on each ticket and receive a free three-month membership. BowieNet has been expanding the limits of artist/fan interaction and collaboration since 1998. Members have co-written a song with Bowie, helped choose album art and packaging, participated in a variety of chats, webcasts and online events and even attended members-only concerts.


Additional cities and show dates to be announced. — Bob Grossweiner and Jane Cohen