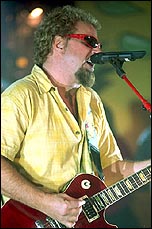 (CelebrityAccess News Service) – Over the past 25 years, Sammy Hagar has performed for more fans in St. Louis than any other musical artist. Recently, Hagar set a local concert record by performing in front of his 400,000th fan at the UMB Bank Pavilion. To celebrate the milestone, Clear Channel Entertainment planned a variety of activities over the weekend including a pre-game ceremony at Busch Stadium, August 21, where Hagar was introduced and honored as "St. Louis' Top Concert Attraction.

The St. Louis Cardinals and CCE presented Hagar with a giant-plaque to commemorate his milestone and Mayor Francis Slay proclaimed the day as "Sammy Hagar Day" in St. Louis. The St. Louis Cardinals named Hagar honorary team captain for the ballgame against the Pirates and invited him to throw the first pitch. On August 22, St. Louis was treated to the world premiere of Hagar's new DVD "Long Road to Cabo" at the American Theatre.

Hagar performed live in front of his 400,000th fan along with the Waboritas, Michael Anthony and the original Montrose at his Cabo Wabo Beach Blast August 23 at the UMB Bank Pavilion. After their performance, Clear Channel Entertainment surprised the band with signed posters from their fans and commemorative robes for their performance in front of a packed house of nearly 19,000 people. St. Louis was the last city on their 2003 summer tour. –by Bob Grossweiner and Jane Cohen