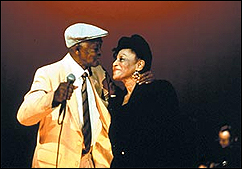 (CelebrityAccess MediaWire) — A British High Court judge came to Cuba in late September to hear testimony from heirs of the Cuban composers of 14 songs dating back to the 1930s in a copyright case brought against the government by an American company.

Justice John Lindsay came to Havana to hold the hearings after attempts to listen to the aging witnesses by video links failed in May.

The case over U.K. publishing rights for the songs could determine the rights to millions of dollars in royalties from traditional Cuban music, which has enjoyed a worldwide revival since the highly successful 1997 Buena Vista Social album.

The U.S.-based Peer International, which signed hundreds of Cuban musicians during the 1940s and 1950s Mambo and Cha Cha Cha days, sued Cuba’s state-run Editora Musical de Cuba (EMC) for copyright violation, according to a report by Reuters.

British lawyers acting for the Cubans said many of the musicians had been treated unfairly and were paid “a few pesos and maybe a drink of rum.”

The five composers of the songs claimed by Peer International are all dead, but their impoverished heirs stand to benefit from the case.

The company said royalties were paid until Cuban President Fidel Castro seized power in 1959 and the United States enforced sanctions against Cuba as it steered toward communism.

Witnesses were questioned in the testimony about Peer International’s efforts to re-sign contracts with Cuban composers or their heirs after the Buena Vista boom took off and songs long forgotten recovered their commercial value.

The company’s representative was a for EMC employee who now lives in the United States.

“I received very small amounts of money,” said 83-year-old Evelio Landa Martinez, who wrote the 1955 hit “The Mulatas of the Cha Cha Cha, according to Reuters.

“That’s my signature,” he said when looking at a 1999 receipt for a $1,443 cash payment from Peer International.

The EMC argues that the original contracts are void because they were “unconscionable bargains” and have no legal standing.

Cuban musicians see the landmark case as protecting their interests and their country’s culture.

“The copyright of any composer must be respected, because it is our cultural heritage,” said Salvador Repilado, son of the late Buena Vista singer Compay Segundo. –by CelebrityAccess Staff Writers