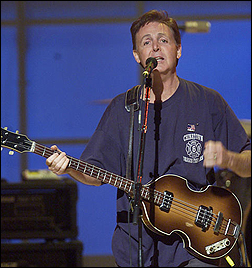 Controversy is brewing over Paul McCartney's cancelled November 23 concert at
the Telstra Dome in Melbourne, Australtheia. Several Australian newspapers are
reporting that the concert was postponed because he couldn't pull off two concerts,
which was the deal.

The Herald Sun reports McCartney's asking price was $6 million (per show)
with a guarantee of two concerts. But when one didn't sell out, he bailed.

"Paul McCartney wanted a figure in excess of $US6 million for coming down here,
and getting those numbers was impossible without doing two shows," an industry
insider said, the paper reports.

It further reported that according to an industry executive with more than 20 years'
experience as a promoter and well versed with the business side of
McCartney's tour, said, "Paul McCartney goes crazy every time he doesn't sell out
a show. He throws a fit."

"Two or three shows on the current American tour were 'soft' and they went to
great lengths to cover up seats and make it look like a sell-out," he continued.
"There are a great deal of positives if a promoter gets McCartney. It's a 35-song
set list, he does the work and he's got a great work ethic. But it is negative in terms
of his obsessive personality.

"The reality is: the deal was for two shows and they didn't have the numbers to sell
out one show."

A spokesman for the Dainty Corporation confirmed that 30,000 of the 38,000
tickets had been sold for the Telstra Dome concert.