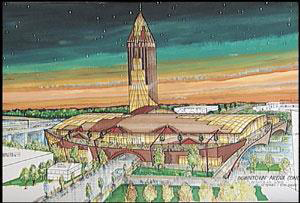 WICHITA — According to The Wichita Eagle building a downtown arena over the Arkansas River would be far too costly and time-consuming, a group of government and business leaders decided Tuesday.

About 20 representatives from the city of Wichita, the Wichita Area Chamber of Commerce, the Wichita Convention and Tourism Bureau, the Greater Wichita Area Sports Commission, the Wichita Downtown Development Corp. and others decided the idea shouldn't be pursued.
They came to their conclusions after listening to the concept's creator, former Sedgwick County Commissioner Dave Bayouth, and hearing a report by the county's design consortium, which listed a wide array of problems with the idea.

Bayouth, who wants the arena built over the Arkansas River at the Lewis Street Bridge, called the gathering "a kangaroo court" that had already decided to reject his idea. "This is not exactly what I call a fair and impartial hearing, or study," Bayouth said. "They have no vision. They still don't understand the dynamics of this thing, that it's that great."
Bayouth said he didn't know what his next step would be, but he wasn't ready to give up on his idea.

The idea isn't dead. The county commission, which has the final say on arena matters, will consider the design consortium's report today.

The five commissioners selected a site on the east side of downtown Wichita for the arena in November, but they could vote to study Bayouth's idea further, said commission chairman Ben Sciortino.

Sciortino admitted that Bayouth's concept is exciting and creative, and has captured the public's imagination.

But, he said, "I think when the public can see the amount of time that would be taken just to pursue it, plus the dollars — hundreds of millions of dollars more — I think that will kind of cool the initial tidal wave of excitement."

The arena designers' report said Bayouth's arena concept would require building the equivalent of a 42-lane bridge over the river for a base. Such a structure would cost at least $50 million, the report said.

A multiple of $50 million would be required to add a 100-foot-tall building on top of it.
Additional costs would be required for escalators and elevators that would have to rise 50 feet or more to the first concourse level for patrons and 25 to 30 feet to the event floor for trucks and freight.

There would be other costs, as well — for example, to re-route McLean Boulevard and to do further design work and governmental approvals related to the waterway, the study said.
The county has a budget of $184.5 million for the arena, the amount approved by voters in a 2004 sales tax referendum.

The consortium's report also said access to an arena over the water would be difficult with the current street configuration along the river. It predicted a critical parking shortage, with limited parking at Century II and Lawrence-Dumont Stadium, as well as limited space to add new parking.

Bayouth disagreed with the findings and said his idea deserved a more detailed study.
"All I heard was how much more it was going to cost," he said. "They don't know that. They haven't taken the time to study it."