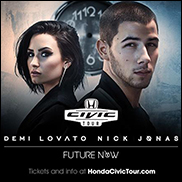 
"We want our fans to step in to our worlds and to feel like they’re a part of Honda Civic Tour: Future Now from the moment they enter the venue ‘til the moment they leave,” says Demi Lovato.


Nick Jonas adds, “We’re looking forward to creating an unforgettable experience that’s unlike anything else.”


Singer/songwriter Demi Lovato’s current album, Confident, is out now on Hollywood Records/Island Records/Safehouse Records and features the hit songs “Cool for The Summer” and the title track “Confident.” Her newest single is the power ballad “Stone Cold”. In addition, Demi is playing Smurfette in the upcoming animated feature ‘Get Smurfy’.


Island Records/Safehouse Records artist, Nick Jonas reintroduced himself as a solo artist on his hit self-titled debut, released in November 2014. The critically acclaimed album includes hits “Jealous,” “Chains” and “Levels.” Currently in the studio working on his new album, Nick also stars in “Kingdom,” and will appear in the upcoming James Franco produced film Goat, which premiered at Sundance.


2016 marks the 15th Anniversary of the Honda Civic Tour. Over 4.2 million fans have attended Honda Civic Tour since 2001 to see 68 artists including One Direction, Maroon 5, Linkin Park, Fall Out Boy, Panic! At The Disco, blink-182, The Black Eyed Peas, Incubus and more.