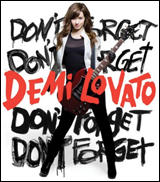 "I've always dreamed of headlining my own tour, and it's so exciting to have that dream come true," says Demi Lovato. "I'm looking forward to seeing all my incredible and supportive fans, and play new music for them." Lovato previously toured on the sold out Jonas Brothers "Burnin' Up" tour in 2008, and will join them for the South American leg of their tour this Spring. Demi has also been added to the line-up of Bamboozle May 3 in E. Rutherford, NJ, which also features No Doubt and Sum 41.

Demi Lovato released a deluxe edition of "Don't Forget" last week, which includes two new bonus songs and a DVD of music videos, live footage and exclusive behind the scenes footage. Demi performed on the hit ABC show "Dancing with the Stars" last week, and will perform her newest single "Don't Forget" on Ellen today. Demi has already sold well over 1,100,000 digital downloads of her first three singles, "Get Back," "La La Land" and "Don't Forget." The multi-talented Lovato is also working on new material for her sophomore solo album due in July.

David Archuleta, the runner-up on the 7th season of "American Idol," hails from Murray, Utah, a town just outside Salt Lake City. He came to national attention and captured the hearts and imagination of a nation with several show stopping performances on "American Idol." David Archuleta's eponymous debut has been certified gold with over 500,000 albums sold since its November 2008 release.