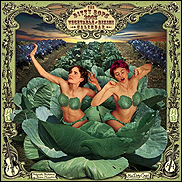 LOS ANGELES (CelebrityAccess MediaWire) — Indie darlings The Ditty Bops are set to hit the road to spread the message of environmentalism through their music with tour that will draw attention to sustainable agriculture, local farm support and green eating.

Last year, Amanda Barrett and Abby DeWald, raised environmental attention by traversing their entire coast-to-coast tour by bicycle. This summer, the bandmates are performing a six-week tour packed with farm visits, farmers’ markets and herbs growing in the tour van.

The pair told the San Francisco Chronicle that they got the idea for the Farm Tour while on their 4,700-mile two-wheeler trek last year.

“It occurred to me that our slow movement and the Slow Food movement are kind of similar,” Barrett told the paper. “We couldn’t believe how many acres of Farm land that were just corn and soy beans along the way.”

The Farm Tour begins August 1st on Windrose Farms in Paso Robles, California. The outdoor show, the first of 31 planned hay bale-side performances, will include farm fresh produce for snacks, and a tour of the farm’s sheep, lilacs and antique apples included in the ticket price. The entire show’s proceeds will benefit the independent 50-acre farm.

Other shows include appearances at farmer’s markets, coffee houses, and even the UC Santa Cruz on-campus sustainable gardening sciences lab.

The band also has promotional material such as the 2007 Vegetable Bikini calendar, which features the musicians in creative bikini-wear made from cabbage, lotus and carrots in artful, pinup-style prints. The tour van will be equipped with an EarthBox – a 29-inch, water-saving terrarium that will be sprouting lettuce greens and herbs – nestled in with five musicians, their gear and two bicycles. One EarthBox will be raffled off at each show, with all proceeds supporting the Growing Connection, an organization promoting the devices as a way to grow inexpensive produce.

The band also plans to meet with local farmers, chefs and food folks along the way, including a visit to Strauss organic dairy and a performance at Sebastopol’s Redwood Hill Farm…strictly for the farm’s goats.

“We’re expanding our demographics to interspecies,” Barrett jokes the Chronicle. “It will be some interesting acoustics out there, and a nice break from our regular audience, who usually talks back. I want to see how the goats will react.”

Tickets for the Farm Tour, excluding the free performance for their four-legged friends, are on sale now. –by CelebrityAccess Staff Writers