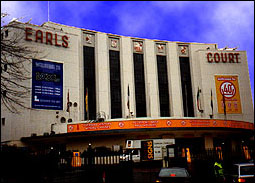 The American technician plunged from the raised stage into the basement at the Earls Court arena while setting up the singer's Reinvention concert.

Blackfriars Crown Court heard the accident happened while he was working at the arena on 6 August 2004. Earls Court Ltd pleaded guilty to the breach of the Health and Safety at Work Act.

The company pleaded guilty to a breach of Section three of the Health and Safety at Work Act 1974 following an investigation by environmental health officers from the Royal Burough of Kensington and Chelsea. The court heard that Earl's Court Limited had not carried out a suitable and sufficient risk assessment of how to safely access the raised floor and had not implemented the necessary control measures to prevent such a fall.

This is not the first time the company has been prosecuted over work at height incidents; it was also convicted for incidents in 1999 and 2000. It was fined a total of £150,000 for these offences.

Cllr Fiona Buxton, Cabinet Member for Environmental Health, said, "This was a truly awful accident made worse because it was so clearly preventable. This is the third time Earl's Court Limited has been fined for a serious breach of health and safety legislation leading to death or serious injury and I hope that this sentence gets the message across to them and other companies that the Council will deal decisively with anyone who does not follow the correct health and safety procedures in the workplace."

Civil proceedings are now expected to be brought by Mr. McLaughlin.