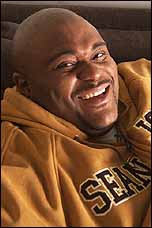 NEW YORK (AP) — >"American Idol" winner Ruben Studdard gets his turn to reclaim some of the spotlight from friendly singing rival Clay Aiken when his album, "Soulful," is released Tuesday.

With his oversized frame and booming, soulful voice, Studdard would seem to be a tough guy to overshadow. Yet ever since he captured the TV talent contest last May, he's been upstaged by his twig of a runner-up, Aiken.

Aiken's single, "This is the Night/Bridge over Troubled Water," released at the same time as Studdard's "Flying Without Wings/Superstar," was tops in sales. Rolling Stone magazine put Clay on its cover first. It was Aiken who sang at the World Series and Miss America pageant. And Clay's album was rolled out first, becoming an instant best seller in October.

Now Studdard finally gets his turn when his disc is released by J Records.

The apparent popularity disparity has some fans of the "Velvet Teddy Bear" — as Studdard has been dubbed — in a tizzy. But ask the man himself, and he responds with a shrug.

"Everybody has their time in the spotlight, and it's Clay's time to shine right now," the 24-year-old told The Associated Press during an interview in his hotel suite. "He has his album out that's selling tremendously well, and I'm proud of him.

"Of course, I would want to have the same success. Every artist wants to be a multiplatinum-selling artist, so I'm looking forward to selling a lot of CDs as well, but I'm not going to hate on Clay just because he's doing his thing."

Studdard's thing is primarily R&B with a little hip-hop and gospel, unlike the pop-centric albums from Aiken and last year's "American Idol" winner, Kelly Clarkson.

"I'm not a pop artist, so I think that's like the difference between me and the rest of the artists that have left the 'American Idol' thing," said Studdard.

The Birmingham, Ala. native doesn't veer too much from the formula that established him. Clive Davis, J Records' founder and the executive producer of "Soulful," says it was important to stay true to Studdard's R&B roots.

"I saw the pride in the black community, that this was the first 'American Idol' who was a black person, so therefore we wanted to honor and do right by Ruben," he said.

However, he took pains to note that he felt the album would have pop success.

"Every so often, you do get an artist who is multi-format, and I think Ruben can be that kind of artist," Davis said.

The hefty Studdard was an early favorite in the competition with his powerful, soulful tenor, which recalled greats like Luther Vandross. He became so popular that even the clothing he wore with the Birmingham area code, 205, became a hot seller.

Yet when the competition was finally decided, he faced stiff competition from Aiken, who in many ways seemed Studdard's polar opposite — a white, lanky guy with a nerdy image and a voice made for Broadway.

Out of nearly 24 million votes cast by telephone, Studdard won by only 130,000. The margin was so slim, some Aiken fans demanded a recount. And when the pair toured with other "Idol" contestants, it seemed Aiken's popularity continued to soar while Studdard faded into the background.

Dave Karger, who wrote a cover story on Aiken for Entertainment Weekly, says one reason the media seemed to be more enchanted with Aiken was personality.

"He's much chattier than Ruben, and I think from a media point of view, he has proven himself to be a more appealing interview subject," Karger said. "Ruben … is much more reserved, and just much more quiet, and I think because of that, people in the media have assumed that he has nothing to say."

Indeed, it's hard to get anything too revealing out of Studdard. Though polite and charming, he reveals only what he needs to during an interview, giving short answers in his low-key manner.

He admits he's "always just in chill mode. … Some reporters think I'm real soft spoken and all this other stuff, but that's just who I am. Everybody wants you to change, to acclimate to them. Especially with the media. Everybody's like, 'Ruben's too soft spoken. He should talk up!'"

Both Studdard and Aiken are on record labels run by Davis, a veteran hitmaker, who says that he's shipping 1.4 million copies of Studdard's album in anticipation of a smash: "The orders for Ruben are slightly higher for what they are for Clay."

"Clay was everywhere because Clay had an album out," said Davis. "We knew that we were building a major album for Ruben. There's no show that Clay was on that Ruben will not be on."

Studdard also says that as the winner of the competition, he had more commitments than Aiken, giving the runner-up more time to do other interviews and boost his profile. Also, "I was on the cover of Rolling Stone too," Studdard says.

Studdard also has something Aiken does not: a Grammy nomination, for best male R&B vocal performance.

But if Studdard is annoyed, upset or worried about the attention Aiken has received, you'd never know it. He refuses to be baited into a rivalry with his friend.

"People always ask me if I'm upset that Clay's on (the covers). No I'm not upset. If I was the runner-up, I'd want to be on all the magazine covers too, and people would be just as pissed off at me doing stuff," he says. "It is a media thing. It's been given way more hype than it should have ever received."