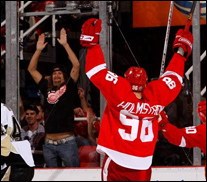 DETROIT (CelebrityAccess MediaWire) — Detroit’s native son, Kid Rock, was once again in the heart of Hockeytown cheering on the Detroit Red Wings at a sold out Joe Louis Arena. The Red Wings went on to beat the Pittsburgh Penguins in Game 2 of the Stanley Cup Finals.

Kid Rock is no stranger at “The Joe” for Red Wings games and as one of the hottest tickets in Downtown Detroit. Kid Rock’s annual concerts at Joe Louis Arena are always a guaranteed sell out.

The spirit of Hockeytown was alive and kicking in the Foxtown Entertainment District. Hockeytown Cafe erected a 20-foot screen to show Game 1 of the Stanley Cup Finals on the outdoor patio. The 8 p.m. start drew thousands of fans to cheer on their beloved Red Wings.

Across the street at Comerica Park, over 126,000 fans took in a three-game Memorial Day Weekend series, as the Detroit Tigers hosted the Minnesota Twins.

To round out the weekend of events, Oprah Winfrey’s Broadway hit The Color Purple played to capacity crowds at the Fox Theatre. –by CelebrityAccess Staff Writers