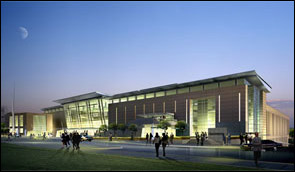 RALEIGH, NC (CelebrityAccess MediaWire) — Live Nation made a gift of a steel amphitheater skeleton and a fabric cover to the city which plans to utilize it as a part of the construction of a new 5,000 seat shed. In exchange for this largess, Live Nation will be given the nod to book about 25 shows a year at the venue.

Originally used on Boston, and then Denver where Live Nation acquired it, the skeleton will likely be deployed across the street from Raleigh's new downtown convention center, local news outlet WRAL reported.

While Live Nation will be booking approximately 25 shows a year at the new venue, the city also retains the right to book an equal number of shows on their own. Additionally, City officials are angling to sell naming rights to the venue along with two $1 million dollar naming rights deals for the new convention center.

The city will be responsible for laying a foundation for the steel frame and will likely need to replace the fabric covering, two expenses that will hopefully be offset to some extent by the sponsorship deal.

"We think the amphitheater would be wonderful to bring the kids out," Raleigh resident Ann-Lynn Bailey told WRAL "Culturally it would be really good for them to bring music. It would be really fun to have (the children) come and listen to music." – CelebrityAccess Staff Writers