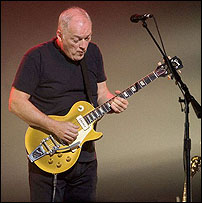 LONDON (CelebrityAccess MediaWire) — The rumors around a possible Pink Floyd reunion were given another shot in the arm by Floydie David Gilmour, who intimated during a recent BBC 6Music interview that the band may reform for more one-off charity gigs like Live8.

"Who knows? Who knows the future? I haven't absolutely said no to the possibility, but I think that in reality any sort of long-term thing together is not going to happen. At my incredibly advantaged age – having achieved this – I've earned the right to sit on my ass for a little while and consider what to do next."

Gilmour has also announced that he's planning to perform Floyd's iconic Atom Heart Mother at the Chelsea Festival this June. Joining Gilmour in this effort will be Italian Floyd tribute act Mun Floyd, a ten-piece brass ensemble from the Royal College of Music, cellist Caroline Dale, and the 40 singer choral group Canticum.

Gilmour won't be playing at Glasto however and according to reports, Eavis politely rejected the generous offer.

A source told Britain's The Sun newspaper: "Dave has always had a soft spot for Glastonbury. He has a window in his touring plans and thought he would contact Michael about performing. And while Michael was grateful for the offer he turned it down. He wants the event to appeal to a younger generation and feels that Dave wouldn't." Ouch. – CelebrityAccess Staff Writers