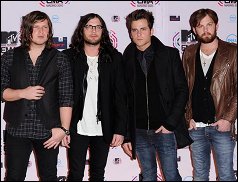 LONDON (CelebrityAccess MediaWire) — The Kings of Leon have taken their 'poo' discrimination to an extreme.

You might remember earlier this year when the Followill brothers fled a St. Louis stage as they were showered with pigeon excrement. Well now, the UK's The Sun newspaper is reporting that the band have asked for the backstage bathrooms and showers to be cordoned off when they play at Manchester's MEN Arena and at the Sheffield Arena. This means that the roadies and stagehands will have to seek out alternative "arrangements".

This bathroom ban also applies to The Whigs, Kings of Leon's support act according to The Sun.

There were reports from this summer's V Festival about Caleb, Nathan, Jared and Matthew not wanting to share facilities in the artists' village.

While some suspect that the strange request could be due to upset tummies, or maybe just paranoia, nothing has been confirmed. Let's just say that concertgoers may want to take an extra look at the folks entering the common bathroom stalls at the arenas.

You never know who you may be "unloading" next to.