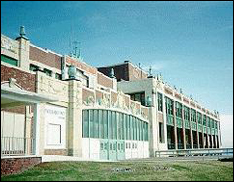 “This one deal enables us to complete our New Jersey venue portfolio by adding three key venues in the important small and midsize venue range, with no significant capital outlay,” said Live Nation New York President Kevin Morrow. “From an artist’s first play at the historic Stone Pony to the 16,000 capacity PNC Bank Arts Center, we now have a complete venue portfolio spanning every attendance level to offer artists and fans in New Jersey. “

Gary Mottola, President of Madison Marquette Investments, which together with Asbury Partners is undertaking the Asbury Park Waterfront Redevelopment, stated: “We’ve always believed that music is the foundational spirit of Asbury Park and that honoring its musical heritage is a key to the revitalization. We’ll be developing an exciting array of restaurants, retailers and public spaces along a mile of Boardwalk, and building 3000 residential units, all with a total development value of over $2 billion. The Paramount Theatre and Convention Hall are being carefully restored. To insure that we have top-class talent to fill these venues we look to Live Nation, the biggest and best company of its kind. Live Nation will be an integral partner in keeping our project on track and in tune with the musical spirit of this great city.”

"Asbury Park is not only known all over the world for launching the careers of some of the greatest artists of all time, but is also very close to my heart,” says Live Nation’s John D’Esposito. “Now that we have extended our relationship into these three amazing venues we will be able to be able to play an important role in nurturing new talents in New Jersey, as we’ve done with the Jonas Brothers, as well as provide a world class showcase for established musicians, as we are for our inaugural booking at The Paramount on April 24th with the legendary Lou Reed.”

The Asbury Park venues are cornerstones to the Asbury Park Waterfront Redevelopment project. The Stone Pony, one of the world’s most popular and historic venues has undergone extensive renovations and now boasts state of the art lighting and sound equipment. The historic Paramount Theatre went through a dramatic restoration which was completed last summer. Convention Hall, overlooking the beach, will soon see a series of renovations which will include new sound and lighting systems and interior beautification.

The inaugural performance of this promising partnership will be the April 24th performance of American rock icon Lou Reed at The Paramount Theatre. Tickets go on sale Saturday, March 15th at 11am. More details are available at www.livenation.com.