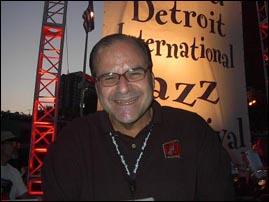 DETROIT (CelebrityAccess MediaWire) – According to the “Detroit Free Press” Frank Malfitano is stepping down as artistic director of Music Hall Center for the Performing Arts, but he may not be stepping away from its signature event, the Detroit International Jazz Festival.

In the wake of talks to start a nonprofit foundation to produce the festival, Malfitano has resigned from Music Hall. But Malfitano, who has maintained the festival's high artistic standards during his five-year tenure despite financially troubled times, is likely to keep his hands on the steering wheel of the free Labor Day weekend festival.

"Nothing would please me more than to be able to continue on with the festival," said Malfitano, 59. "I think Detroit is the music capital of the world."

Gretchen Valade — a Carhartt clothing heiress and owner of locally based Mack Avenue Records — has pledged $10 million to create a nonprofit foundation dedicated to producing the festival, which has struggled to remain financially viable under Music Hall's umbrella.

Valade's plan calls for Music Hall to give up control. Her team and Music Hall leaders are exploring ways to restructure the event without severing all ties with Music Hall.

Malfitano spearheaded the festival's landmark 2005 expansion that left the core jazz festival at Hart Plaza but added new stages devoted to R&B and roots music along Woodward Avenue and at Campus Martius. The expansion led to a large increase in attendance and created the template for financial stability and growth.

Malfitano, who lives in Syracuse, N.Y., said he resigned for family and health reasons — and recognition that though he remains devoted to the jazz festival, Music Hall needs a full-time artistic director to sharpen its vision for its downtown theater.

Malfitano booked concerts but others handled dance and theater. Financial troubles forced Music Hall to scale back its theater, dance and music programming. Duncan expects the next artistic director to help define a niche for Music Hall in Detroit's cultural landscape.