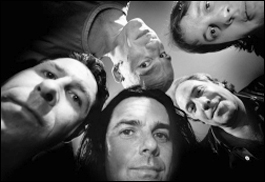 LONDON (VIP-NEWS) — Rock group Marillion are to make their new album available as a free download through file-sharing websites.

But a pop-up box will appear on computer screens when the tracks are first played, encouraging fans to give the band their e-mail address.

Keyboardist Mark Kelly said downloaders would be contacted with offers of gig tickets and other merchandise, to try to make some money back for the band.

"We're willing to try new things and we want to see what happens," he said.

"Everybody's aware of the effect of peer-to-peer file-sharing on CD sales and the music industry in general," he told the BBC News website.

"Up until recently we've felt fairly immune to that because the fans have been really supportive of the band and, I suppose, because of the age demographic, they do tend to prefer CDs to downloads."

Bands have been exploring new ways to release music in recent months, with Radiohead making their last album available online on a pay-what-you-like basis and Prince giving his most recent CD away with a newspaper.

Kelly acknowledged that making Marillion's music available for free was against his natural instinct – "we come from a long tradition of selling it".

But he still expected fans would buy the CD version of Happiness is the Road when it is released on 20 October.

"People forget Radiohead were still number one in the album charts," he added.

"They also say they weren't very successful because they only got an average of £2 per download.

"But they wouldn't have got £2 per sale from [record company] EMI, so in those terms it was actually a big success, and they still sold CDs."

Paul Williams, who edits record industry publication Music Week, said Marillion had always been "pretty ground-breaking in terms of doing things differently and they have a very loyal fanbase".

Taking that into consideration, he said, the download plan would "probably work for them quite successfully".

Marillion have bypassed record companies in the past by asking fans to pay for albums before recording began, thereby securing funds for studio time.

"Most acts these days certainly don't make their fortunes based on the traditional way of selling recorded music," Mr Williams noted.

Matt Phillips, director of communications for the British Phonographic Industry, said: "There's nothing unlawful about peer-to-peer technology per se, and it can be a powerful distribution platform for artists and labels.

"The issue arises when that technology is used unlawfully to avoid paying for the music you download – as it is in 99.9% of cases.

"Ultimately it's emerging acts that suffer most from illegal file-sharing since they don't have a large fanbase or touring income to rely on, and they need the investment of music companies at the beginning of their careers.

"It may be the case that artists and labels are happy to give some music away for free from time to time, but like anyone else, creative people have the right to be paid for their work." According to BBC.