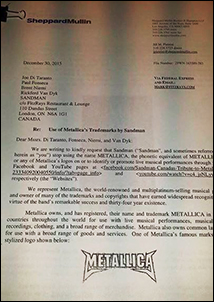 (Hypebot) – Is having a clone band cover your music a compliment or a threat? Bands like Pink Floyd, The Allman Brothers and more think its an honor. Apparently, Metallica does not.


By Mike Masnick from Techdirt


Metallica, in some circles, will always be known as the band that sued Napster and promised to go after the band's own fans that used the platform. For some former fans of the band, nothing the band has done since can redeem it. And I'm assuming the latest move probably won't help much either: various reports note that Publisha Canadian Metallica tribute/cover band called "Sandman" showed up at a gig recently, only to discover a 41 page cease and desist letter from the band's lawyers, claiming that they were unfairly profiting off the Metallica name and logo.


Unfortunately, no one has released the full letter, but one of the band's members, Joe Di Taranto, posted a photo to Facebook of the first page of the letter:


Some in the music press seem to think that the threat is just fine because "would you want someone running around using your likeness and making money off it?" But, that's shortsighted and misleading. First of all, the purpose of trademark is not that no one else can make money off of your marks. If it's being used for nominative use, to directly reference the mark itself, that's perfectly legal. And, given that the whole point of Sandman is to be a Metallica tribute band, it's quite likely that its use of the Metallica brand was nominative.

No one's getting confused. No one thinks that it's actually Metallica. Everyone recognizes what a tribute band is. And the reason they go see and support tribute bands (hell, the reason people create tribute bands in the first place) is because they love and support the original band. None of this is done to be unfair to Metallica, but to celebrate the band, and how does the band react, but with a giant legal threat.


Update: And… of course, now that the band is getting lots of bad publicity over this, it's suddenly blaming "an overzealous attorney" and insisting that neither the band nor its management had any idea about this. Maybe time to find better lawyers.