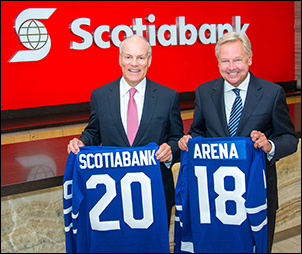 TORONTO (CelebrityAccess) — Maple Leaf Sports and Entertainment and Scotiabank have sealed the deal on what may be one of the largest naming rights sponsorship deals in history.

Effective as of July 2018, the venue currently known as the Air Canada Centre will be renamed as Scotiabank Arena in a deal reported to be worth $800 million over 20 years, or roughly $40 million a year, according to the Toronto Star.

As part of the transfer of the arena naming rights in 2018, MLSE and Air Canada have also reached an agreement on a long-term partnership renewal that will see the company continue as the official airline partner of both the Maple Leafs and Raptors.

“We have always sought new and innovative partnerships with the goal of building strong and enduring communities,” said Brian Porter, Scotiabank’s President and CEO. “Today’s announcement is an extension of Scotiabank’s unwavering love of sports and our commitment to help young people reach their full potential. We believe that MLSE is an ideal partner for Scotiabank to reach our objectives.”

The deal is an impressive arrangement for MLSE and a sharp increase over the building's previous agreement with Air Canada, who acquired naming rights to the venue in 1999 for about $4 million a year. It also compares favorably with similar venues like Capital One Arena, which the banking giant secured naming rights to earlier this month for an estimated $10m a year.

“For the past 18 years, Air Canada Centre has not only been home to the Maple Leafs and Raptors, it has also hosted hundreds of the most popular concerts and events in the industry, helping contribute to Toronto’s well-deserved reputation as one of the top sports and entertainment destinations in the world,” said Larry Tanenbaum, Chairman of the Board for MLSE. “We are grateful to Scotiabank for their continued support and this expanded partnership as we look ahead to what we expect to be 20 of the most exciting years in Toronto sports and entertainment history.”