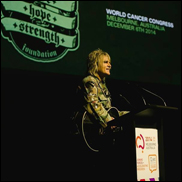 DENVER (CelebrityAccess MediaWire) – Mike Peters, two-time cancer survivor and lead singer of the Welsh rock band The Alarm believes a guitar is mighty enough to save the lives of cancer patients across the world. And he proved it by having his instrument fully emblazoned with signatures from delegates and dignitaries alike at the World Cancer Congress 2014.


Many celebrities and professional athletes have survived cancer and shared their journeys. Mike Peters co-founded of the Love Hope Strength Foundation, the world's largest, music-driven cancer charity in the world. Founded in 2007, the charity's mission is that everyone, everywhere deserves access to quality cancer care and a marrow donor if needed.


Peters has played with some of the biggest acts in history and on the world's greatest stages- Bob Dylan, U2, Bruce Springsteen and Queen at Wembley Stadium. And yet Peters has one achievement crowning all others. He beat cancer. Twice. In fact, two weeks before his speech at the World Cancer Congress he underwent chemotherapy.


As Cary Adams, CEO of the UICC, the largest cancer support organization in the world, shared, "It was an emotional evening seeing Mike Peters perform with such energy, commitment and feeling. I am sure we will measure the impact his presence has had on the World Cancer Congress over the many years ahead."


The World Cancer Congress 2014 attracted over 2,700 delegates from 115 countries. At an event dominated by researchers, educators and medical professionals, it was Mike Peters taking center stage. His powerful, personal message and music touched all and spoke volumes while kicking off the December 3-6 event in Melbourne, Australia.


At the finale event, "Inspiring Lives/Inspiring Music," Peters invited the entire cancer delegation to join the musicians on stage (including Glenn Tilbrook of Squeeze), thus forming a full ensemble from all 115 countries represented at the event.